It's the 21st, time for the Teen FIRST blog tour!(Join our alliance! Click the button!) Every 21st, we will feature an author and his/her latest Teen fiction book's FIRST chapter!

Paul McCusker is the author of The Mill House, Epiphany, The Faded Flower and several Adventures in Odyssey programs. Winner of the Peabody Award for his radio drama on the life of Dietrich Bonhoeffer for Focus on the Family, he lives in Colorado Springs with his wife and two children. 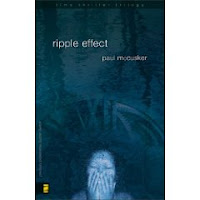 “I’m running away,” Elizabeth announced defiantly. She chomped a french fry in half.

Jeff looked up at her. He’d been absentmindedly swirling his straw in his malted milkshake while she complained about her parents, which she had been doing for the past half hour. “You’re what?”

“You weren’t listening, were you?”

“Then what did I say?” Elizabeth tucked a loose strand of her long brown hair behind her ear so it wouldn’t fall into the puddle of ketchup next to her fries.

“You were complaining about how your mom and dad drive you crazy because your dad embarrassed you last night while you and Melissa Morgan were doing your history homework. And your dad lectured you for twenty minutes about . . . about . . .” He was stumped.

“Yeah, except that you and Melissa were supposed to be studying the . . . um — ”

“Right, and Melissa finally made up an excuse to go home, and you were embarrassed and mad at your dad — ”

“As usual,” she said and savaged another french fry.

Jeff gave a sigh of relief. Elizabeth’s pop quizzes were a lot tougher than anything they gave him at school. But it was hard for him to listen when she griped about her parents. Not having any parents of his own, Jeff didn’t connect when Elizabeth went on and on about hers.

He was mid-suck on his straw and nearly blew the contents back into the glass. “Huh?”

“What did I say after that?”

“You said . . . uh . . .” He coughed, then glanced around the Fawlt Line Diner, hoping for inspiration or a way to change the subject. His eye was dazzled by the endless chrome, beveled mirrors, worn red upholstery, and checkered floor tiles. And it boasted Alice Dempsey, the world’s oldest living waitress, dressed in her paper cap and red-striped uniform with white apron.

She had seen Jeff look up and now hustled over to their booth. She arrived smelling like burnt hamburgers and chewed her gum loudly. “You kids want anything else?”

Rescued, Jeff thought. “No, thank you,” he said.

She cracked an internal bubble on her gum and dropped the check on the edge of the table. “See you tomorrow,” Alice said.

As she walked off, Alice shot a curious look back at Elizabeth. She was old, but she wasn’t deaf.

“Aw, c’mon, Bits — ” Jeff began. He’d called her “Bits” for as long as either of them could remember, all the way back to first grade. “It’s not that bad.”

“You try living with my mom and dad, and tell me it’s not that bad.”

“I know your folks,” Jeff said. “They’re a little quirky, that’s all.”

“Quirky! They’re just plain weird. They’re clueless about life in the real world. Did you know that my dad went to church last Sunday with his shirt on inside out?”

“And wearing his bedroom slippers?”

“Don’t you dare smile,” Elizabeth threatened, pointing a french fry at him. “It’s not funny. His slippers are grass stained. Do you know why?”

“Because he does his gardening in his bedroom slippers.”

Elizabeth threw up her hands. “That’s right! He doesn’t care. He doesn’t care how he looks, what -people think of him, or anything! And my mom doesn’t even have the decency to be embarrassed for him. She thinks he’s adorable! They’re weird.”

Elizabeth threw herself against the back of the red vinyl bench and groaned. “You don’t understand.”

“Sure I do!” Jeff said. “Your parents are no worse than Malcolm.” Malcolm Dubbs was Jeff’s father’s cousin, on the English side of the family, and had been Jeff’s guardian since his parents had died five years ago in a plane crash. As the last adult of the Dubbs family line, he came from England to take over the family fortune and estate. “He’s quirky.”

“But that’s different. Malcolm is nice and sensitive and has that wonderful English accent,” Elizabeth said, nearly swooning. Jeff’s cousin was a heartthrob among some of the girls.

“Don’t get yourself all worked up,” Jeff said.

“My parents just go on and on about things I don’t care about,” she continued. “And if I hear the life-can’t-be-taken-too-seriously-because-it’s-just-a-small-part-of-a-bigger-picture lecture one more time, I’ll go out of my mind.”

Again Jeff restrained his smile. He knew that lecture well. Except his cousin Malcolm summarized the same idea in the phrase “the eternal perspective.” All it meant was that there was a lot more to life than what we can see or experience with our senses. This world is a temporary stop on a journey to a truer, more real reality, he’d say — an eternal reality. “Look, your parents see things differently from most -people. That’s all,” Jeff said, determined not to turn this gripe session into an Olympic event.

“They’re from another planet,” Elizabeth said. “Sometimes I think this whole town is. Haven’t you figured it out yet?”

“I like Fawlt Line,” Jeff said softly, afraid Elizabeth’s complaints might offend some of the other regulars at the diner.

“Everybody’s so . . . so oblivious! Nobody even seems to notice how strange this place is.”

Jeff shrugged. “It’s just a town, Bits. Every town has its quirks.”

“Is that your word of the day?” Elizabeth snapped. “These aren’t just quirks, Jeffrey.”

Jeff rolled his eyes. When she resorted to calling him Jeffrey, there was no reasoning with her. He rubbed the side of his face and absentmindedly pushed his fingers through his wavy black hair.

“What about Helen?” Elizabeth challenged him.

“Which Helen? You mean the volunteer at the information booth in the mall? That Helen?”

“I mean Helen the volunteer at the information booth in the mall who thinks she’s psychic. That’s who I mean.” Elizabeth leaned over the Formica tabletop. Jeff moved her plate of fries and ketchup to one side. “She won’t let you speak until she guesses what you’re going to ask. And she’s never right!”

“Our only life insurance agent has been dead for six years.”

“And there’s Walter Keenan. He’s a professional proofreader for park bench ads! He wanders around, making -people move out of the way so he can do his job.” Her voice was a shrill whisper.

“Ben Hearn only pays him to do that because he feels sorry for him. You know old Walter hasn’t been the same since that shaving accident.”

“But I heard he just got a job doing the same thing at a tattoo parlor!”

“I’m sure tattooists want to make sure their spelling is correct.”

Elizabeth groaned and shook her head. “It’s like Mayberry trapped in the Twilight Zone. I thought you’d understand. I thought you knew how nuts this town is.” Elizabeth locked her gaze onto Jeff’s.

He gazed back at her and, suddenly, the image of her large brown eyes, the faint freckles on her upturned nose, her full lips, made him want to kiss her. He wasn’t sure why — they’d been friends for so long that she’d probably laugh at him if he ever actually did it — but the urge was still there.

“It’s not such a bad place,” he managed to say.

“I’ve had enough of this town,” she said. “Of my parents. Of all the weirdness. I’m fifteen years old and I wanna be a normal kid with normal problems. Are you coming with me or not?”

Jeff cocked an eyebrow. “To where?”

“To wherever I run away to,” she replied. “I’m serious about this, Jeff. I’m getting all my money together and going somewhere normal. We can take your Volkswagen and — ”

“Listen, Bits,” Jeff interrupted, “I know how you feel. But we can’t just run away. Where would we go? What would we do?”

“And who are you all of a sudden: Mr. Responsibility? You never know where you’re going or what you’re doing. You’re our very own Huck Finn.”

“Not according to Mr. Vidler.”

“Mr. Vidler said that?” Jeff asked defensively, wondering why their English teacher would be talking about him to Elizabeth.

“He says it’s because you don’t have parents, and Malcolm doesn’t care what you do.”

Jeff grunted. He didn’t like the idea of Mr. Vidler discussing him like that. And Malcolm certainly cared a great deal about what he did.

Elizabeth continued. “So why should you care where we go or what we do? Let’s just get out of here.”

“No! I’m not listening to you,” Elizabeth shouted and hit the tabletop with the palms of her hands. Silence washed over the diner like a wave as everyone turned to look.

“Keep it down, will you?” Jeff whispered fiercely.

“Either you go with me, or stay here and rot in this town. It’s up to you.”

Jeff looked away. It was unusual for them to argue. And when they did, it was usually Jeff who gave in. Like now. “I don’t know,” he said quietly.

Elizabeth also softened her tone. “If you’re going, then meet me at the Old Saw Mill by the edge of the river tonight at ten.” She paused, then added, “I’m going whether you come with me or not.”

My Review: I loved this book. I did not know what to expect as it is not what I normally read. I was pleasantly surprised. It grabbed me and held my attention through the whole book. As soon as I finished I went to Amazon and put book two on my wish list. It is appropriate for teens and this adult liked it too. :)