Goodbye Hollywood Nobody by Lisa Samson

It is October 11th, and FIRST is doing a special tour to 'Say Goodbye to Hollywood Nobody'. 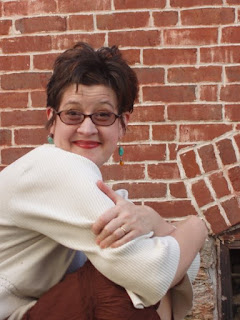 Lisa Samson is the author of twenty books, including the Christy Award-winning Songbird. Apples of Gold was her first novel for teens

These days, she's working on Quaker Summer, volunteering at Kentucky Refugee Ministries, raising children and trying to be supportive of a husband in seminary. (Trying . . . some days she's downright awful. It's a good thing he's such a fabulous cook!) She can tell you one thing, it's never dull around there.

Other Novels by Lisa: 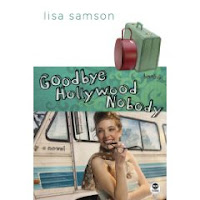 I awaken to a tap on my shoulder and open my eye. My right eye. See, these days it could be one of four people: Charley, Dad, Grampie, or Grammie.

Oh well, might as well go for broke. I open the other eye.

“Did you sleep well?”

I shake my head and reach for my cat glasses. “Nope. I kept dreaming about Charley in Scotland.” We sent her off with her new beau, the amazing Anthony Harris, two days ago. “I imagined a road full of sheep chasing her down.”

“That would be silly. They would have to know she hates lamb chops.” Grammie sits on my bed. Yes, my bed. In their fabulous house. In my own wonderful room, complete with reproductions of the Barcelona chair and a platform bed of gleaming sanded mahogany. I burrow further into my white down comforter. I sweat like a pig at night, but I don’t care. A real bed, a bona fide comforter, and four pillows. Feather pillows deep enough to sink the Titanic in.

She pats my shoulder, her bangled wrists emitting the music of wooden jewelry. “Up and at ’em, Scotty. Your dad wants to be on the road by seven thirty.”

Several minutes later, I revel in the glories of a real shower. Not the crazy little stall we have in the TrailMama, which Dad gassed up last night for our trip to Maine. Our trip to find Babette, my mother. Is she dead or alive? That’s what we’re going to find out.

The warm water slides over me from the top of my head on down, and I’ve found the coolest shampoo. It smells like limeade. I kid you not. It’s the greatest stuff ever.

Over breakfast, Grampie sits down with us and goes over the map to make certain Dad knows the best route. My father sits patiently, nodding as words like turnpike, bypass, and scenic route roll like a convoy out of Grampie’s mouth.

Poor Grampie. Dad is just the best at navigation and knows everything about getting from point A to point B, but I think Grampie wants to be a part of it. He hinted at us all going in the Beaver Marquis, their Luxury-with-a-capital-L RV, but Dad pretended not to get it.

Later, Dad said to me, “It’s got to be just us, Scotty. I love my mother and father, but some things just aren’t complete-family affairs.”

He nods. “I’d just as soon they not be there while we fall apart.”

So then, I hop up into our RV, affectionately known as the TrailMama, Dad’s black pickup already hitched behind. (Charley’s kitchen trailer is sitting on a lot in storage at a nearby RV dealership, and good riddance. I’m hoping Charley never needs to use that thing again.) “Want me to drive?”

Yep. I still don’t have my license.

Man. But it’s been such a great month or so at the beach. So, okay, I don’t tan much really, but I do have a nice peachy glow.

And Grampie grilled a lot, and Grammie helped me sew a couple of vintage-looking skirts, and I’ve learned the basics of my harp.

I jump into the passenger’s seat, buckle in, and look over at my dad. “You really ready for this?” My heart speeds up. This is the final leg of a very long journey, and what’s at the end of the path will determine the rest of our lives.

I shake my head. “No, Dad. Whatever we do, whatever happens from here on out, we do it together.”

“Deal.”
My Review: Noooo it can't be so. This is the last book in the series of Scotty Dawn and family/friends. Over four books I have come to love Scotty Dawn and her unusual story and characteristics. I have enjoyed watching/reading Scotty Dawn's journey including faith, family, and love. She has grown so much the by the end of the series. It is never preachy but gently, especially the last book uncovers the importance of faith to Scotty Dawn. This series is targeted YA and it is perfect for them but adults love it also.I would definitely read them in order because the story develops more and more in each book including spoilers. I highly recommend the whole series. :)
- October 11, 2008

Thank you for the review! We will definitely look for the whole series!

I've never heard of this series, but I love Lisa Samson's writing. I'll have to look for them. Sorry, the end of a great series is always miserable, isn't it?

I look forward to reading this book, and I agree, I'm not ready to let them go.

RYC: I hear you on the blog tours! I am actually a bit ahead, which is unusual for me.