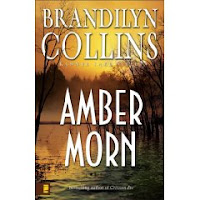 * Even though I only read one book today at least it is a great one. I had a busy Saturday so I did not read any. I am going to the beach on Friday(August 1) so hopefully I will read tons of books and have lots of new reviews.
* I read book four in the Kanner Lake series by Brandilyn Collins- Amber Morn. I highly recommend the whole series. It is full of suspense and sometimes a little romance. She is known for seatbelt suspense. When I start one of her books I know I will not be able to put it down.
*ABOUT THE BOOK
The whole thing couldn’t have taken more than sixty seconds.Bailey hung on to the counter, dazed. If she let go, she’d collapse—and the twitching fingers of the gunman would pull the trigger. The rest of her group huddled in frozen shock.Dear God, help us! Tell me this is a dream . . .The shooter’s teeth clenched. “ Anybody who moves is dead.”On a beautiful Saturday morning the nationally read “Scenes and Beans” bloggers gather at Java Joint for a special celebration. Chaos erupts when three gunmen burst in and take them all hostage. One person is shot and dumped outside.Police Chief Vince Edwards must negotiate with the desperate trio. The gunmen insist on communicating through the “comments” section of the blog—so all the world can hear their story. What they demand, Vince can’t possibly provide. But if he doesn’t, over a dozen beloved Kanner Lake citizens will die...Amber Morn is the climactic finale to Collins’ widely read Kanner Lake series. All first three titles in the series, Violet Dawn, Coral Moon, and Crimson Eve, were bestsellers. Library Journal placed Crimson Eve on its Best Books of 2007 list, and hailed it the “Best Christian suspense of 2007.”
* ABOUT THE AUTHOR
Brandilyn Collins is a best-selling novelist known for her trademark Seatbelt Suspense™. These harrowing crime thrillers have earned her the tagline“Don’t forget to b r e a t h e …®”Brandilyn writes for Zondervan, the Christian division of HarperCollins Publishers, and is currently at work on her 19th book. Her first, A Question of Innocence, was a true crime published by Avon in 1995. Its promotion landed her on local and national TV and radio, including the Phil Donahue and Leeza talk shows. She’s also known for her distinctive book on fiction-writing techniques, Getting Into Character: Seven Secrets a Novelist Can Learn From Actors (John Wiley & Sons), and often teaches at writers conferences. Brandilyn blogs at Forensics and Faith. Visit her Websiteto read the first chapters of all her books
- July 27, 2008

Brittanie, thanks so much for featuring Amber Morn on your blog. I appreciate your review, and I'm glad you enjoyed the series.

Next up for me--Dark Pursuit, releasing in November. (A stand-alone suspense.)

Thanks again for your kind words.