An Eye for an Eye by Irene Hannon 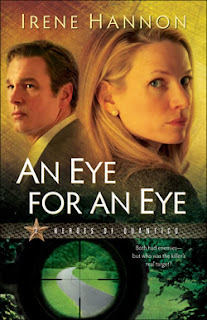 Book Summary:
After he accidentally shoots a teenager at a tense standoff, FBI Hostage Rescue Team member Mark Sanders is sent to St. Louis to work as a field agent and get his bearings while the bad press starts to settle. Just weeks away from returning to Quantico to resume his work on the HRT, Mark has a chance encounter with an old flame, Emily Lawson. But their reunion is cut short by a sniper. Now Mark must find the shooter before he tries to strike again. But what is his motive--and who was his intended target? Can Mark put the pieces together, keep Emily safe, and rekindle a long-dead relationship at the same time? A fast-paced tale of romance, suspense, and intrigue, An Eye for an Eye is the exciting second installment in the Heroes of Quantico series.
My Review:
I loved this second book in the Heroes of Quantico series. It can stand alone but I read the first and looked forward to this one immensely. I cannot wait to read the third book in the series featuring Nick.

In An Eye for an Eye there is more romantic tension between the two main characters. Mark and Emily were high school sweethearts then grew apart in college and life. Now they have come together again when he is out jogging and runs into her and then a sniper takes a shot. They are not sure who the target is at first but they use the time to get to know each other again. There is great interaction and dialogue between the FBI team and Mark and Emily. The characters are well developed and the plot line interesting. Great romantic suspense novel. Highly recommended. :)


Available September 2009 at your favorite bookseller from Revell, a division of Baker Publishing Group.
- September 24, 2009

Email ThisBlogThis!Share to TwitterShare to FacebookShare to Pinterest
Labels: An Eye for an Eye, book review, Irene Hannon

Brittanie: Thanks for the great review! I'm so glad you liked Book 2 in my Heroes of Quantico series! Irene Hannon