Persephone Review: The Making of a Marchioness by Frances Hodgson Burnett 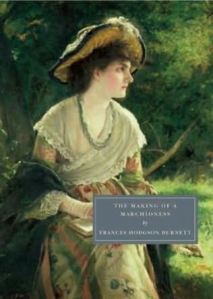 Little Lord Fauntleroy (1886) and The Secret Garden (1911) are enduring bestsellers, but this 1901 novel is many people's favourite: Nancy Mitford and Marghanita Laski loved it, and some US college courses teach it alongside Pride and Prejudice and Jane Eyre.

Part I, the original Marchioness, is in the Cinderella (and Miss Pettigrew) tradition, while Part II, called The Methods of Lady Walderhurst, is an absorbing melodrama; most novels end 'and they lived happily ever after' but this one develops into a realistic commentary on late-Victorian marriage. 'Delightful... A sparky sense of humour combined with lively social commentary make this a joy to read' wrote the Bookseller. Kate Saunders told Open Book listeners that she was up until two in the morning finishing this 'wildly romantic tale whose hero and heroine are totally unromantic' (Daily Telegraph); the Guardian referred to 'a touch of Edith Wharton's stern unsentimentality'; the Spectator wrote about the novel's 'singular charm'; and the Daily Mail stressed the 'sharp observations in this charming tale.'

My Review:
For the most part I liked this book. It was published in 1901 and is set in England. The only thing that really annoyed me at times was character of Emily Fox Seton. She seemed too good to be true. Even though she is thirty four years old and on her own she is still very naive and kind. She always thinks others are better than her. She is also very poor and works hard for everything she has.  There were lots of good descriptions and language at times was beautiful. Her life changes for the better one day when one of her employers invites her to go to the country with her as a companion. While there she meets Lord Walderhurst, a Marquis, who ends up asking her to marry him which she did not see coming. The second part of the book focuses on her life after marriage. This is one of my favorite authors and I enjoyed reading an adult book by her. Recommended. :)

The end paper fabric is a 1901 figured cotton called 'Tulips', which is simple, cheerful and graceful; Emily might have picked tulips at Mallowe Court.
- February 27, 2011

Email ThisBlogThis!Share to TwitterShare to FacebookShare to Pinterest
Labels: Frances Hodgson Burnett, Persephone Reading Weekend, The Making of a Marchioness

"Too good to be true" characters get on my nerves a bit, too. I like flawed characters; they're more interesting. But, I do love Frances Hodgson Burnett. I didn't realize she'd written for adults, as well.