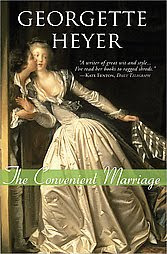 Plot Summary:
The Earl of Rule was supposed to marry the oldest and prettiest Winwood sister but she was in love with a military man. So her sister Horatia who is not that pretty and has a stutter offers herself as a sacrifice to marry him since he really wants to marry into this family. He has lots of money but they have an old family line. Lord Rule goes along with it because he likes her. They get married and go back to London to live but it gets complicated. Horry goes a little wild and throws herself into a social life including a lot of gambling and spending. Lord Rule does not overly involve himself in the beginning letting her run free with some amusement. He seems very patient and kind toward her and he is twice her age. As the book goes on they start to love each other. Then a series of misunderstandings occur.

My Review:
The second half of the book moves at a faster pace than the first half which was setting the background. I loved the Earl of Rule. I would like to marry a man like him although at times he seemed a little too good to be true even in the pages of a fiction book. Horry's stutter really got on my nerves by the end of the book. Other than that I really liked the book. The plot line and characters were interesting. The last part of the book was like a comedy of errors. It reminded me a little of Shakespeare. Recommended especially for fans of Jane Austen and Georgette Heyer. :)

About the Author:
Georgette Heyer wrote over fifty novels, including Regency romances, mysteries, and historical fiction. She was known as the Queen of Regency romance, and was legendary for her research, historical accuracy, and extraordinary plots and characterizations.
- March 08, 2010

Thanks you for the thoughtful review. I enjoy Heyer also and look forward to reading this in the future.

This sounds like a fun read. I love the cover, the picture draws me in!

Sounds like a good one, for when I need another Heyer.

I'm glad you enjoyed this one! That always makes these types of tour so much more enjoyable.

So glad you enjoyed this one. It's been a couple of years since I read it, but I remember really liking the Earl too. :)

I'm glad you enjoyed it! It sounds like fun.

An enjoyable read The Convenient Marriage by Georgette Heyer. loved the way you wrote it. I find your review very genuine and original, this book is going in by "to read" list.