Through the Fire by Shawn Grady

This week, the
Christian Fiction Blog Alliance
is introducing
Through The Fire
Bethany House (July 1, 2009)
by
Shawn Grady

Shawn Grady signed with Bethany House Publishers in 2008. He was named “Most Promising New Writer” at the 39th Annual Mount Hermon Writers Conference. Through the Fire is his debut novel.

Shawn has served for over a decade as a firefighter and paramedic in northern Nevada. From fire engines and ambulances to tillered ladder trucks and helicopters, Shawn’s work environment has always been dynamic. The line of duty has carried him to a variety of locale, from high-rise fires in the city to the burning heavy timber of the eastern Sierras.

Shawn currently lives in Reno, Nevada, just outside of Lake Tahoe. He enjoys spending time in the outdoors with his wife, three children and yellow Labrador. 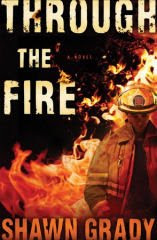 Firefighting burns in Aidan O'Neill's blood. The son of a fireman, O'Neill has a sixth sense about fire and often takes dangerous risks. When one act of disobedience nearly gets a rookie killed, O'Neill is suspended. His weeks off are supposed to be a time to reflect but instead he escapes to Mexico, where another rash act of bravery actually kills him. But only for a few minutes.

Called back to Reno, he's now haunted by visions of hell and paralyzed in the face of fire. And at the worst time, because an arsonist is targeting Reno. With a growing love interest with one of the investigators complicating everything, Aidan must discover where his trust rests as the fires creep ever closer.

If you would like to read the first chapter of Through The Fire, go HERE

Overall this was a wonderful debut novel. The beginning was a little slow but once it got started the suspense took over. Who was starting the fires? That was one of the main questions. You can tell the book was written by a real firefighter. It is authentic and realistic. The characters came off the page and I was drawn into their lives. I look forward this author's next book. Recommended.

Email ThisBlogThis!Share to TwitterShare to FacebookShare to Pinterest
Labels: CFBA, Shawn Grady, Through the Fire

You described this so well, for a one-paragraph review!! It's definitely authentic and realistic. I really enjoyed Through the Fire!