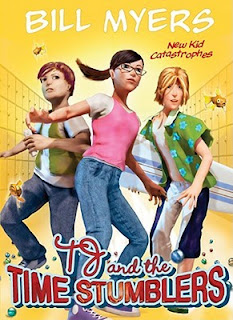 This six-book series centers around two 23rd century goofballs, Tuna and Herby, who travel back in time to study TJ Finkelstein for their history project. TJ will someday become a great leader who demonstrates honesty, integrity, thoughtfulness, self-sacrifice, respect for others—all traits she hones and grasps through her adventures in this series. Unfortunately, Tuna and Herby get stuck in TJ’s time (modern day), so she has to deal with their schemes while juggling the normal issues of a seventh grader who has moved to a new city, is trying to fit in, and is coping with her mother’s death and her family’s new life.

In New Kid Catastrophes, TJ accidentally makes an enemy of Hesper Breakahart, the superstar who attends their school. And Tuna and Herby’s attempts to help just lead to one disaster after another. In the end, TJ is still very unpopular, but she learns the value of looking past appearances and gains a few friends—and the attention of the most popular boy in school.

This is book one in a new series targeted to Christian tweens although I think upper elementary would like it best. They are simple and easy to read. I am 30 so my opinion may be a little different from the age group. I thought the plot and characters were interesting. The writing was not as great though. That age might not notice. I did like the way it had a lesson in it. This book it was not to judge based on appearance. Simple yet interesting and funny at times recommended.
- July 03, 2013

Email ThisBlogThis!Share to TwitterShare to FacebookShare to Pinterest
Labels: bill myers, tj and the time stumblers