The Passion of the Purple Plumeria by Lauren Willig (Review) 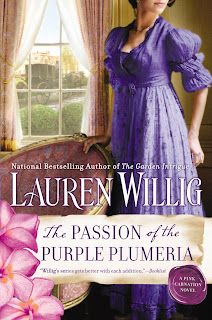 Colonel William Reid has returned home from India to retire near his children, who are safely stowed in an academy in Bath. Upon his return to the Isles, however, he finds that one of his daughters has vanished, along with one of her classmates.

Having served as second-in-command to the Pink Carnation, one of England’s most intrepid spies, it would be impossible for Gwendolyn Meadows to give up the intrigue of Paris for a quiet life in the English countryside—especially when she’s just overheard news of an alliance forming between Napoleon and an Ottoman Sultan. But, when the Pink Carnation’s little sister goes missing from her English boarding school, Gwen reluctantly returns home to investigate the girl’s disappearance.

Thrown together by circumstance, Gwen and William must cooperate to track down the young ladies before others with nefarious intent get their hands on them. But Gwen’s partnership with quick-tongued, roguish William may prove to be even more of an adventure for her than finding the lost girls…

I really enjoyed reading the latest in the Pink Carnation series. We finally get to read Miss Gwen's story. I recommend reading them in order as she is a secondary character that is developed through them. Miss Gwen is known for her old maid vim and vinegar self. She is the chaperon for the pink carnation. She has a cane with a hidden blade that she pops people especially men with. Miss Gwen is part of the story set in the early 19th century. Most of the book is focused on her plot. There are also chapters focusing on the present day England part. Eloise is a historian living in England researching the pink carnation. She has a British boyfriend named Colin. They are looking for the same jewels that Miss Gwen is tracking down in the past. The switching back and forth is seamless. I loved how Miss Gwen and Colonel William Reid interact. Their relationship develops while they are looking for his daughter Lizzy and the pink carnation's sister Agnes. The ending surprised me but was satisfying. I look forward to the next book in the series. This is a light hearted romantic historical mystery book. Recommended. :)
- July 13, 2013

Email ThisBlogThis!Share to TwitterShare to FacebookShare to Pinterest
Labels: Lauren Willig, The Passion of the Purple Plumeria

good to know some new releases! but still a long long time to the release date! cant wait!