The Judge by Randy Singer (Review) 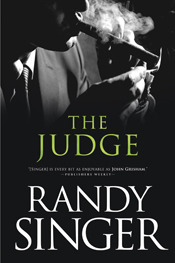 Previously published as The Cross Examination of Oliver Finney.

When a brilliant billionaire is diagnosed with inoperable brain cancer, he realizes that all his considerable wealth cannot prepare him to meet his Maker. But he has an idea that might: he will stage the ultimate reality show. With his true agenda hidden, he auditions followers from all the world’s major religions, inviting them to the trial of their lives on a remote island, where they must defend their beliefs against spiritual challenges.

Oliver Finney, a feisty old judge with his own secrets, is chosen to defend Christianity. As the program takes a strange twist, he quickly realizes he is trapped in a game of deadly agendas that may cost him his life. With Internet access monitored, Finney sends coded messages to his law clerk, Nikki Moreno. Aided by a teen crypto-geek, Nikki soon discovers the key to understanding Finney’s clues in an apologetics book Finney wrote and must race against time to decipher the mysteries contained in the ancient words of Christ before her boss dies defending them.

I am not sure how to categorize this book. It was not really a thriller but it had a little suspense to it. I did not figure out who the brilliant billionaire was until the end. The plot was interesting and unique. The characters were mostly developed. The book is not as religious as you think it might be. The main plot was what was happening behind the scenes. I liked how the relationships developed between the characters. The judge was the only outspoken Christian in the book and the author went a little over the top making Nikki his opposite. She drinks, parties, flirts excessively to get her way, and does not take life seriously enough. She does love the judge like a father though and he loves her like a daughter even though she is his legal assistant. The judge is dying from lung cancer and looks forward to defending Christianity and his faith for the country before he dies. The other participants are chosen to defend their religion by the producers. I ended up liking them even though I don't agree with their religion. There was a twist at the end I did not see coming. Overall I enjoyed reading the book and it kept my attention. Recommended.

Email ThisBlogThis!Share to TwitterShare to FacebookShare to Pinterest
Labels: Randy Singer, The Judge