The Inconvenient Marriage of Charlotte Beck by Kathleen Y'Barbo (Review) 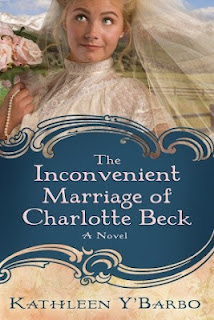 About the book:
Unlikely romance is sometimes just an inconvenient marriage away…
Charlotte Beck may be entering adulthood, but she can’t seem to keep to her stubborn, independent spirit from bucking social protocol. Fed up with her behavior, Charlotte’s father Daniel pressures her to settle into a nice marriage despite knowing she is set on going to college.
Then Daniel sees Charlotte with the handsome but annoying English astronomer Alex Hambly, and everything changes.
Though Alex and Charlotte can barely stand one another, Daniel offers them a deal they can’t refuse: if they agree to marry, he will save Alex’s family from financial ruin and grant Charlotte the freedom to go to college. Reluctantly the couple agrees, but in private they plot to annul the marriage as soon as possible.
But when Alex’s feelings change and he refuses to dissolve their contract, will Charlotte find a way out of her vows? Or will she discover that maybe this marriage isn’t so inconvenient after all?
My Review:
This was a light at times humorous Christian historical fiction book. There is barely any faith element in it though. Charlotte does not have a relationship with God for most of the book. Her father does mention it some and tries to have conversations with her about it. Alex seems to have a relationship with God which is good. I like the chemistry between Alex and Charlotte. She is a spoiled brat for at least half the book but Alex still thinks she is attractive. Alex is a Viscount in England when they meet and Charlotte is there to meet and party. Although at times they bicker it makes for a rousing book. It is third in a series but you do not have to read the first two for this one to make sense.
About the author:
Kathleen Y'Barbo is a bestselling author of 40 award-winning novels and novellas with over 950,000 books in print. Kathleen is a tenth generation Texan, a graduate of Texas A&M University’s Mays Business School, and the mother of three grown sons and a daughter. She recently enlisted for a happily-ever-after of her own with her hero in combat boots. Find out more about Kathleen at http://www.kathleenybarbo.com/.

Review copy provided by publisher which in no way influenced my review.
- June 16, 2012