Oath of the Brotherhood by C. E. Laureano (Review) 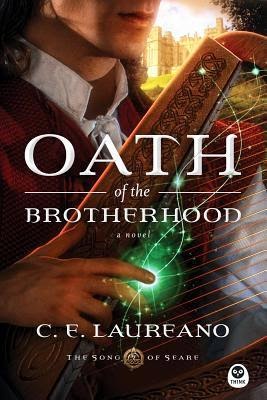 In a kingdom where the Old Ways hold fast and a man’s worth lies entirely in his skill with the sword, Conor Mac Nir is a scholar, a musician, and a follower of the forbidden Balian faith: problematic for any man, but disastrous for the son of the king.

When Conor is sent as a hostage to a neighboring kingdom, he never expects to fall in love with the rival king’s sister, Aine. Nor does he suspect his gift with the harp (and Aine’s ability to heal) touches on the realm of magic. Then his clan begins a campaign to eliminate all Balians from the isle of Seare, putting his newfound home in peril and entangling him in a plot for control of the island that has been unfolding since long before his birth.

Only by committing himself to an ancient warrior brotherhood can Conor discover the part he’s meant to play in Seare’s future. But is he willing to sacrifice everything—even the woman he loves—to follow the path his God has laid before him?

I was entranced by this book. I could not read fast enough. The author does a great job at description and developing the characters. I felt like I was there with Conor and Aine. The plot was unique and though confusing at times it is the first book in a series. This would be considered a YA Christian fantasy although I really think it goes beyond that. The ending has a huge cliffhanger and I almost wish the book would have just kept going for a long time. I can't wait for the next book in the series. I am going to get a copy to give to my 17 year old girl cousin who loves books like this. It is reminiscent of Narnia and Lord of the Rings. Highly Recommended. :)

C.E. Laureano's love of fantasy began with a trip through a magical wardrobe, and she has never looked back. She's happiest when her day involves martial arts, swords, and a well-choreographed fight scene, though when pressed, she'll admit to a love of theater and travel as well.

Appropriately, she's the wife to a martial arts master and mom to two boys who spend most of their time jumping off things and finding objects to turn into light sabers. They live in Denver, Colorado with a menagerie of small pets.


Review copy provided by publisher in exchange for an honest review.
- July 20, 2014

Email ThisBlogThis!Share to TwitterShare to FacebookShare to Pinterest
Labels: C. E. Laureano, Oath of the Brotherhood