"Playing for Pizza" by John Grisham 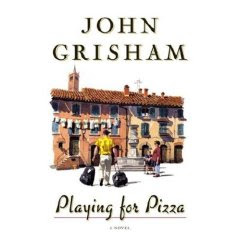 From Publishers Weekly Book Description:
Third-string Cleveland Browns quarterback Rick Dockery becomes the greatest goat ever by throwing three interceptions in the closing minutes of the AFC championship game. Fleeing vengeful fans, he finds refuge in the grungiest corner of professional football, the Italian National Football League as quarterback of the inept but full-of-heart Parma Panthers. What ensues is a winsome football fable, replete with team bonding and character-building as the underdog Panthers challenge the powerhouse Bergamo Lions for a shot at the Italian Superbowl. The book is also the author's love letter to Italy. Rick is first baffled and then enchanted by all things Italian-tiny cars! opera! benign corruption!-and through him Grisham (The Firm) instructs his readership in the art of gracious living, featuring sumptuous four-hour, umpteen-course meals. The writing sometimes lapses into travel-guide ("most Italian cities are sort of configured around a central square, called a piazza") and food porn ("[the veal cutlets are beaten with a small bat, then dipped in eggs, fried in a skillet, and then baked in the oven with a mix of parmigiano cheese and stock until the cheese melts"), but it's invigorated by appealing characters and lively play-by-play. The result is a charming fish-out-of-water story.
Copyright © Reed Business Information, a division of Reed Elsevier Inc. All rights reserved.

Amazon.comPlaying for Pizza: A Q&A with John Grisham
Q: American football in Italy seems like an unlikely subject for a John Grisham novel. What was the inspiration for Playing for Pizza?
A: Three years ago when I was in Bologna researching "The Broker", I discovered American football. One of my guides in the area played football for the Bologna Warriors for 10 years. I couldn't believe that American football actually existed there, but the more I heard about it the more intrigued I became.
Q: There is some great football writing in this novel. What kind of research was involved in capturing how this American institution is played in small town Italy?
A: The only way to research the book was to go to Parma and watch a game. The coach is an American who played at Illinois State, and he proved to be extremely valuable. I met many of the Italian players and the story simply unfolded.
Q: Speaking of research, you write lovingly of Italian food and wine in this book. What's your idea of the perfect Italian meal?
A: First course: prosicutto and melon; second course: stuffed tortellini; third course: roasted stuffed capon, all served with a great Barolo wine.
Q: Without giving away too much of the plot, your protagonist falls in love by the novel's end. Did you know when you started writing that Rick would get the girl?
A: Of course.
Q: You have a new legal thriller coming in January 2008. Can you give us any hints about what to expect?
A: I really don't like to talk about a book until it's finished. Sorry. But it will not be another work of non-fiction, nor will it be about football. Lots of lawyers in the next one.
Brittanie: I love John Grisham. My all time favorite is the Pelican Brief but I really enjoyed this one also. This is a lighthearted kinda slow leisurely type book. I fell in love with the setting which is a big part of the book as much a character as the actual characters. I could have dealt without the premarital sex between the main character and the college girl he later meets. But this is not a Christian book and that is evident in the worldview presented. Ignoring that as it played a slight role in the book I really liked this book and recommend it to anybody who likes football, John Grisham, and Italy.

Must be an enjoyable read Playing for Pizza by John Grisham. loved the way you wrote it. I find your review very genuine and orignal, this book is going in by "to read" list.