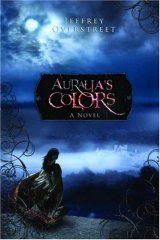 ABOUT THE AUTHOR:
Jeffrey Overstreet lives in two worlds. By day, he writes about movies at LookingCloser.org and in notable publications like Christianity Today, Paste, and Image.His adventures in cinema are chronicled in his book Through a Screen Darkly. By night, he composes new stories found in fictional worlds of his own. Living in Shoreline, Washington, with his wife, Anne, a poet, he is a senior staff writer for Response Magazine at Seattle Pacific University.Auralia’s Colors is his first novel. He is now hard at work on many new stories, including three more strands of The Auralia Thread.

ABOUT THE BOOK:
As a baby, she was found in a footprint.As a girl, she was raised by thieves in a wilderness where savages lurk.As a young woman, she will risk her life to save the world with the only secret she knows.When thieves find an abandoned child lying in a monster’s footprint, they have no idea that their wilderness discovery will change the course of history.Cloaked in mystery, Auralia grows up among criminals outside the walls of House Abascar, where vicious beastmen lurk in shadow. There, she discovers an unsettling–and forbidden–talent for crafting colors that enchant all who behold them, including Abascar’s hard-hearted king, an exiled wizard, and a prince who keeps dangerous secrets.Auralia’s gift opens doors from the palace to the dungeons, setting the stage for violent and miraculous change in the great houses of the Expanse.Auralia’s Colors weaves literary fantasy together with poetic prose, a suspenseful plot, adrenaline-rush action, and unpredictable characters sure to enthrall ambitious imaginations.Visit the Website especially created for the book, Auralia's Colors. On the site, you can read the first chapter and listen to jeffrey's introduction of the book, plus a lit more!
PRAISE
"Film critic and author Overstreet (Through a Screen Darkly) offers a powerful myth for his first foray into fiction. Overstreet’s writing is precise and beautiful, and the story is masterfully told. Readers will be hungry for the next installment."--Publishers Weekly

“Through word, image, and color Jeffrey Overstreet has crafted a work of art. From first to final page this original fantasy is sure to draw readers in. Auralia's Colors sparkles.”-–Janet Lee Carey, award-winning author of The Beast ofNoor and Dragon's Keep

“Jeffrey Overstreet’s first fantasy, Auralia’s Colors, and its heroine’s cloak of wonders take their power from a vision of art that is auroral, looking to the return of beauty, and that intends to restore spirit and and mystery to the world. The book achieves its ends by the creation of a rich, complex universe and a series of dramatic, explosive events.”-–Marly Youmans, author of Ingledove and TheCurse of the Raven Mocker

Brittanie: I am not a huge fantasy fan or reader but I really liked this book. I can't wait for the sequel. It drew me in and I wanted to keep reading so I could find out what happened. The writing was beautiful. I highly recommend this book even if you are not a normal fantasy reader.
- November 28, 2007