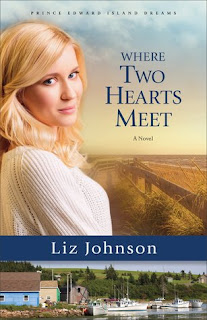 Evocative Contemporary Romance Set in a Charming Inn on Beautiful Prince Edward Island
In her kitchen at the Red Door Inn, executive chef Caden Holt is calm, collected, and competent. But when her boss asks her to show off their beautiful island to impress a visiting travel writer and save the inn, Caden is forced to face a world much bigger than her kitchen--and a man who makes her wish she was beautiful.

Journalist Adam Jacobs is on a forced sabbatical on Prince Edward Island. He's also on assignment to uncover a story. Instead he's falling in love with the island's red shores and Caden's sweets.

When Caden discovers Adam isn't who she thought he was, she realizes that the article he's writing could do more than ruin the inn's chances for survival--it might also break her heart.

Readers will discover hope for the hurting, joy for the broken, and romance for the lonely at the enchanting Red Door Inn.

This was a really sweet unique Christian romance book. I love the setting of Prince Edward Island. This is book two in the Prince Edward Island Dreams. The characters continue from book one so I recommend reading them in order. The main focus of this book is Caden and visitor Adam. Caden  worked at her father's bakery. She became friends with Marie in the first book and at the end Marie asked her to become the chef for the Red Door Inn. Caden is also very self conscious. The only place she is okay is in her kitchen. Adam is a guest at the Inn. He is there because he had a bad experience overseas as a journalist. His editor has a double purpose in sending him to the inn though. Adam invades her kitchen from the beginning. They have sparks from the beginning. Marie thinks Adam is there to write a story on them for a travel magazine so she asks Caden to show him around the Island and make him love them. The Inn is not doing good enough financially so it puts pressure on Caden. Caden and Adam hit it off from the start. The author did a good job developing the characters. There were interesting secondary characters. I could feel, see, and hear the descriptions. This book is going on my keeper shelf and I can't wait to read book three in the series. Recommended.

By day Liz Johnson is a marketing manager for a Christian publisher. She finds time to write late at night and is a two-time ACFW Carol Award finalist. Liz makes her home in Nashville, TN, where she enjoys theater, exploring local music, and making frequent trips to Arizona to dote on her nieces and nephews. She loves stories of true love with happy endings and blogs about her adventures in writing at www.LizJohnsonBooks.com

Review copy provided by publisher in exchange for an honest review.
- November 22, 2016