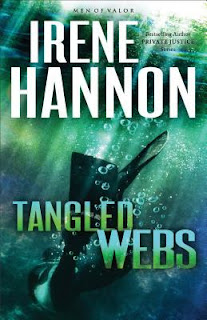 Finn has packed away his combat instincts--but he may need them again when danger begins to stalk his quiet hideaway . . .

After a disastrous Middle East mission ends his six-year Army Ranger career, Finn McGregor needs some downtime. A peaceful month in the woods sounds like the perfect way to decompress. But peace isn't on the agenda once he crosses paths with publishing executive Dana Lewis, a neighbor who is nursing wounds of her own. Someone seems bent on disrupting her stay in the lakeside cabin she inherited from her grandfather. As Finn and Dana work together to discover who is behind the disquieting pranks, the incidents begin to take on a menacing tone. And when it becomes apparent Dana's foe may have deadly intent, Finn finds himself back in the thick of the action--ready or not.

I have been looking forward to Finn's story. He is a former Army Ranger whose career did not end on a good note. This is book three in the Men of Valor series. The first two focused on his brothers. This book can stand alone as his brothers only make a brief appearance. I thought the romance between Finn and Dana was more of a focus than the mystery. There was not a lot of suspense in it. I did like Finn and Dana but I missed the suspense/mystery part. The part that was in there was good. Overall the book is okay but not the best in the series.

Irene Hannon is the best-selling author of more than 35 novels. Her books have been honored with the coveted RITA Award from Romance Writers of America, the HOLT Medallion, the Reviewer's Choice Award from Romantic Times BOOKreviews magazine and the Daphne du Maurier Award for mystery/suspense. Irene and her husband make their home in Missouri, USA. Irene invites you to visit her at her website, www.irenehannon.com

Review copy provided by publisher in exchange for an honest review.
- November 12, 2016