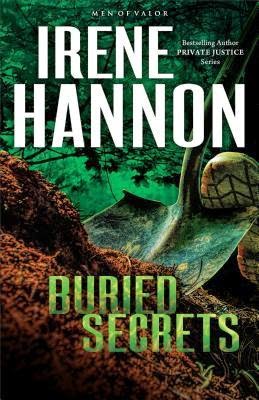 After seven years as a Chicago homicide detective, Lisa Grant has hit a wall. Ready for a kinder, gentler life, she takes a job as a small-town police chief. But the discovery of a human skeleton by a construction crew at the edge of town taxes the resources of her department. A call for assistance brings detective Mac McGregor, an ex-Navy SEAL, to her doorstep. As they work to solve the mystery behind the unmarked grave, danger begins to shadow them. Someone doesn't want this dead person telling any tales--and will stop at nothing to make certain a life-shattering secret stays buried.Master storyteller Irene Hannon is back with an exciting new series featuring former special forces operatives now in the thick of the action in civilian life. Hannon is at the top of her game in this can't-put-it-down thriller that will have readers up until the wee hours devouring every page.

This is one of my favorite authors and I enjoyed reading this latest romantic suspense book from her. It is the start of a new series called Men of Valor. I loved the two main characters of Lisa and Mac. It felt like the book was more focused on them and the romance than the actual mystery though. It would have been nice for the mystery part to be developed more. It was still interesting with a twist or two. I liked the book and will read the next book in the series that will focus on Mac's two brothers. Recommended.


Irene Hannon is the bestselling author of more than forty-five novels, including the Heroes of Quantico, Guardians of Justice, and Private Justice series. Her books have been honored with two coveted RITA Awards from Romance Writers of America, a Carol Award, two HOLT Medallions, a Daphne du Maurier Award, two Reviewers' Choice Awards from RT Book Reviewsmagazine, a Retailers' Choice Award, and a National Readers' Choice Award. In addition, she is a Christy Award finalist, andBooklist included one of her novels in its "Top 10 Inspirational Fiction" list for 2011. She lives in Missouri. Learn more at www.irenehannon.com

Review copy provided by publisher in exchange for an honest review.
- April 28, 2015

Hi! I just found your blog and am intrigued. As a fellow book lover I am always looking for authors I've never heard of and you have given me that with the first post of yours that I read! This book sounds interesting and I'm going to put it on my "to-read" list immediately. I have just started a blog for aspiring writers and book lovers. If you would jump on over and check it out! www.midnightwriter15.blogspot.com