A Year of Living Prayerfully by Jared Brock (Review) 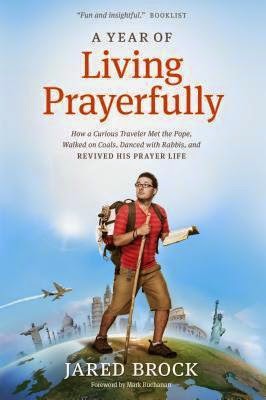 Is Anyone Listening? Do My Prayers Really Change Anything?


Jared Brock sensed that something was missing in his prayer life, so he embarked on a yearlong journey to rediscover the power of prayer (and eat some delicious falafel).
FOLLOW JARED ON A 37,000-MILE TRIP AROUND THE WORLD AS HE...


Although up to 90% of us pray, very few of us feel like we've mastered prayer. A Year of Living Prayerfully is a fascinating, humorous, globe-trotting exploration of prayer that will help you grow your own prayer life.

While filming a documentary about sex trafficking, Jared and Michelle Brock felt a deep need for prayer in their personal lives. In an effort to learn more about prayer, the couple traveled the globe, exploring the great Judeo-Christian prayer traditions: in mountains and monasteries, in Christian communities and cathedrals, standing up and lying down, every hour and around the clock.

Jared's witty reflections on his fast-paced journey will both entertain and inspire you to think about your own prayer journey.


Join Jared on a rollicking modern-day prayer pilgrimage... you'll never pray the same again.
My Review:
This was an interesting book. I did not feel like I learned anything new about prayer though. I picked up the book because the premise intrigued me. It was a travelogue with faith bent with some humor too. I enjoyed reading it. The author put enough description to make you feel like you were there without weighing the book down. I could hardly believe some of the things that happened to him along the way like being in North Korea. And he met the Pope, wow. Recommended for at least the interesting story and another reader might take away more of the spiritual aspect.


Jared Brock is the cofounder of Hope for the Sold, an abolitionist charity that fights human trafficking one word at a time. Jared has written for Huffington Post, Esquire, Converge, and Relevant, and his work has appeared on CBC, CTV, and WDCX. He is happily married to his best friend, Michelle, whom he first kissed in the seventh grade (at a Newsboys concert.) Jared Brock and Rick Warren have sold a combined 35 million books in 85 languages.
Review copy provided by Tyndale Blog Network.
- April 15, 2015

Email ThisBlogThis!Share to TwitterShare to FacebookShare to Pinterest
Labels: A Year of Living Prayerfully, Jared Brock