The Song by Chris Fabry (Review) 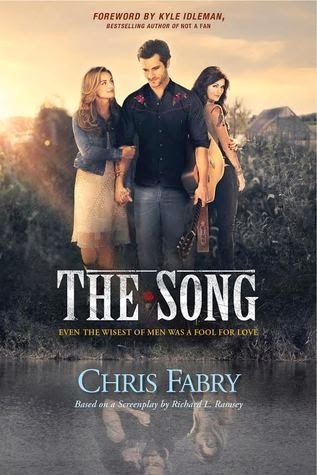 Jed King’s life has been shaped by the songs and mistakes of his famous father. He wants to sing his own song, but the words and melody are elusive. Haunted by the scars inflicted by his broken family, Jed’s dreams of a successful music career seem out of reach . . . until he meets Rose.
As romance quickly blooms, Jed pens a new song and suddenly finds himself catapulted into stardom. But with this life of fame comes temptation, the same temptation that lured his father so many years ago.
Set in the fertile mid-South, this quest for success leads Jed and Rose on a journey that will force them to deal with the pain of loss, failure, and the desire to be who God created them to be.
Lyrical and deeply honest, The Song asks the hard questions of love and forgiveness. When even the wisest of men are fools in love, can true love persevere?

This is the book version of the movie The Song. I have not seen the movie. At first the book started slow then picked up in the second half. The first half set up the background it seems and the action happened in the second half. The book flew by then and held my attention. Rose and Judd seem to have it all until temptation comes to call. I was not happy with all the all the choices Judd was making. The book is loosely based off The Book of Solomon in the Bible. I liked how the author actually put lyrics to some of the songs Judd wrote in the book.  The main theme of redemption and forgiveness is illustrated perfectly.  The characters and plot were interesting and well developed. Recommended especially for married women.

Email ThisBlogThis!Share to TwitterShare to FacebookShare to Pinterest
Labels: Chris Fabry, The Song