The Outcast by Jolina Petersheim (Review) 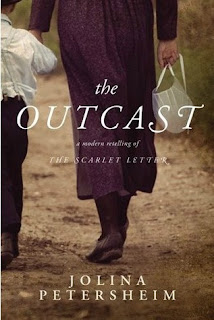 Raised in an Old Order Mennonite community, Rachel Stoltzfus is a strong-willed single woman, content living apart from mainstream society until whispers stir the moment her belly swells with new life. Refusing to repent and name the partner in her sin, Rachel feels the wrath of the religious sect as she is shunned by those she loves most. She is eventually coerced into leaving by her brother-in-law, the bishop.

But secrets run deep in this cloistered community, and the bishop is hiding some of his own, threatening his conscience and his very soul. When the life of Rachel’s baby is at stake, however, choices must be made that will bring the darkness to light, forever changing the lives of those who call Copper Creek home.

I loved this book. It was not an exact match for the Scarlett Letter but had similarities. The author drew me in from the first page and I could not read fast enough. The author drew pictures with her words and the prose was beautiful. It was hard to believe this was her debut novel.The story was told from two main point of views. The first is Rachel the single Mennonite woman who got pregnant out of wedlock. The other is her sister's father in law who is the bishop and passes away early in the book. Rachel moved in with her sister because her sister had a difficult pregnancy. Rachel and her sister are identical twins. There are several interesting secondary characters like the woman who took Rachel in when the community shunned her. The plot and characters are well developed and interesting. Highly Recommended.


Jolina Petersheim holds degrees in English and Communication Arts from the University of the Cumberlands. Though The Outcast is her first novel, her writing has been featured in venues as varied as radio programs, nonfiction books, and numerous online and print publications. Her blog is syndicated with The Tennessean's "On Nashville" blog roll, as well as featured on other creative writing sites. Jolina and her husband share the same unique Amish and Mennonite heritage that originated in Lancaster County, Pennsylvania, but now live in the mountains of Tennessee with their young daughter. Follow Jolina and her blog at http://www.jolinapetersheim.com/.

Email ThisBlogThis!Share to TwitterShare to FacebookShare to Pinterest
Labels: Jolina Petersheim, The Outcast

Thank you so much, Brittanie, for the priceless review. It was very kind of you! :)