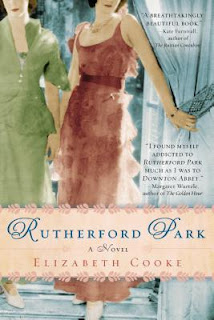 Snow had fallen in the night, and now the great house, standing at the head of the valley, seemed like a five-hundred-year old ship sailing in a white ocean…

For the Cavendish family, Rutherford Park is much more than a place to call home. It is a way of life marked by rigid rules and lavish rewards, governed by unspoken desires…

Lady of the house Octavia Cavendish lives like a bird in a gilded cage. With her family’s fortune, her husband, William, has made significant additions to the estate, but he too feels bound—by the obligations of his title as well as his vows. Their son, Harry, is expected to follow in his footsteps, but the boy has dreams of his own, like pursuing the new adventure of aerial flight. Meanwhile, below stairs, a housemaid named Emily holds a secret that could undo the Cavendish name.

On Christmas Eve 1913, Octavia catches a glimpse of her husband in an intimate moment with his beautiful and scandalous distant cousin. She then spies the housemaid Emily out in the snow, walking toward the river, about to make her own secret known to the world. As the clouds of war gather on the horizon, an epic tale of longing and betrayal is about to unfold at Rutherford Park.


This book had several plot lines within the main one. The main one revolved around Octavia Cavendish and her life. She is a rich lady in England and lives at the estate Rutherford Park. She is married to William but their relationship is a shadow of what it was when they first married. She catches him kissing his cousin one day and learns he has another son by her. Her life is completely shaken up by that and the secrets her children have. Her son fathered a child by one of the servants who ends up killing herself. He also wants to fly planes instead of keeping up the family business. The daughter has her own issues including falling for a con man. Everything eventually comes out. Lives will never be the same but the family is still together and the war starting in Europe will keep changing their world. Fans of Downtown Abbey will love this book. It is definitely an English book.

Elizabeth Cooke lives in Dorset in southern England and is the author of twelve novels, among them the international bestseller The Ice Child. Her last book, the non-fiction The Damnation of John Donellan was described as "a masterpiece" by The Times. She has a long-established reputation for vivid storytelling and historical accuracy.

Elizabeth's family originates in the North Yorkshire Dales - Bronte country - and her grandfather worked at Kiplin Hall, where he was one of the "downstairs" staff. His life, and Yorkshire itself - both its outstanding natural beauty and the industrial life of its mill towns and cities - were the inspiration for Rutherford Park. Elizabeth is currently working on the second Rutherford book.


Review copy provided by publisher in exchange for an honest review.
- August 03, 2013