All In Good Time by Maureen Lang (Review) 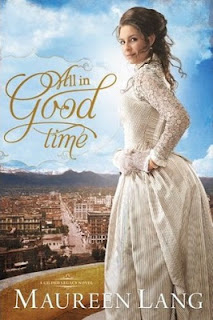 Dessa Caldwell has a dream: to open Pierson House, a refuge for former prostitutes in Denver’s roughest neighborhood. But after exhausting all charitable donations, Dessa still needs a loan, and nearly every bank in town has turned her down. Her last hope hinges on the owner of Hawkins National Bank.

Henry Hawkins has a secret: though he owns the most successful bank in town, his initial capital came from three successful raids on Wells Fargo coaches. Now he’s the most eligible bachelor in Denver, but to protect his criminal past, he’s built a fortress around his heart. Not even the boldest matchmaking mother can tempt him . . . until the day Dessa Caldwell ventures into his bank requesting a loan.

Though he’s certain her proposal is a bad investment, Henry is drawn to Dessa’s passion. But that same passion drives her to make rash decisions about Pierson House . . . and about whom she can trust. One man might hold the key to the future of her mission—but he also threatens to bring Henry’s darkest secrets to light. As the walls around their hearts begin to crumble, Henry and Dessa must choose between their plans and God’s, between safety and love.

This was a good Christian Historical fiction book. The characters and the plot are well developed. The author did a good job with historical facts without it being dry or boring. The book held my attention from beginning to end. I wanted to yell at Dessa  many times. She acts without fully thinking things through sometimes which leads to trouble for her. Her passion for her cause of helping fallen girls escape blinds her. Thankfully she has good people around her to help and her faith. The romance between Henry and her sparked. Turk Foster who owns a large gambling den/concert hall also competes for her affection. There is a slight element of suspense to the book too with the plot of helping some of the girls escape. The spiritual element is naturally woven into the book and not overpowering. The conclusion is satisfying with a wrap up for all main characters. Highly Recommended.


Maureen Lang has always had a passion for writing. She wrote her first novel longhand around the age of 10, put the pages into a notebook she had covered with soft deerskin (nothing but the best!), then passed it around the neighborhood to rave reviews. It was so much fun she's been writing ever since.

2010 will mark the release of her tenth novel. Most of her books are historical, with an emphasis on faith and romance.

Maureen lives in the Midwest with her husband, her two sons, and their much-loved dog, Susie. Visit her Web site at www.maureenlang.com.

Email ThisBlogThis!Share to TwitterShare to FacebookShare to Pinterest
Labels: All In Good Time, Maureen Lang