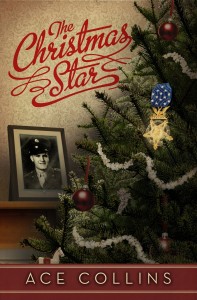 Robert Reed gave his life for his country in the early days of World War II. His sacrifice was honored when his widow and son were presented with the Congressional Medal of Honor. Each Christmas the final decoration Madge Reed hangs on the family’s tree is that medal. Rather than being a symbol of honor for young Jimmy Reed that shining star represents loss, pain, and suffering.


Yet a letter delivered by one of Robert’s fellow soldiers and a mystery posed in that letter put a father’s sacrifice and faith into perspective and bring new meaning to not just the star hanging on the Christmas tree but the events of the very first Christmas. Then, when least expected, a Christmas miracle turns a final bit of holiday sadness into a joy that Jimmy has never known.

I enjoyed reading this Christmas themed coming of age book set in the mid 1940s. Although it is short it packs a punch. I liked how the author developed the character of Jimmy and the others too. The plot was interesting and unique. The ending has several twists that I liked and fit the book. I really did not see all of them coming. It is a heartwarming at times heart wrenching book. Jimmy has a very rough time dealing with the death of his father and chooses to deal with it by acting up. His mother works hard long hours to support them. His father was a good man before the war too and everyone has good things to say about him which makes it harder on Jimmy for some reason and hanging the medal on the tree seems to rub it in too him. Although it is a Christmas Christmas fiction book it is not preachy but lived out through the characters which I loved. I recommend this book to men and women. :)

Bestselling author Ace Collins has written more than fifty books including novels Farraday Road, Swope’s Ridge and Words of the Father, as well as the nonfiction Stories Behind The Best-Loved Songs of Christmas, grAttitudes, and Lassie A Dog’s Life. His books have become movies and network television specials. He has appeared on Good Morning America, the NBC Nightly News and The Today Show and has been featured in the Distinguished Lecture Series at the National Archives in Washington D.C. Ace Collins has sold more than 1.5 million books during his career.
His latest book is the Christian holiday fiction, The Christmas Star.
You can visit Ace on the web at www.acecollins.com.

Review copy provided by Pump Up Your Book Promotions in exchange for an honest review.
- November 08, 2012

Thanks for reading it. It was a joy to write.