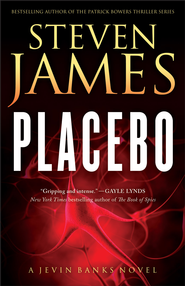 One man must uncover the truth--even when others will stop at nothing to keep it buried.
While investigating a controversial neurological research program, exposé filmmaker Jevin Banks is drawn into a far-reaching conspiracy involving one of the world's largest pharmaceutical firms. He seeks answers about the questionable mind-to-mind communication program--and answers to his own family tragedy.

Rooted in groundbreaking science, Placebo explores the far reaches of science, consciousness, and faith. This taut, intelligent, and emotionally gripping new thriller from master storyteller Steven James will keep you flipping pages late into the night.


My Review:
Overall I enjoyed reading first book in the new Jevin Banks series. The characters were interesting and came alive. The plot was a little choppy in spots. The story line was still thought provoking. The main interests seem to be mind to mind communication like twin connection. Jevin is an magician/illusionist. He had a really good career until his wife killed herself and their twin sons. After that he switched from stage shows to a TV show exposing fakes like psychics. Along with his assistant Charlene they go to a medical facility to investigate. They end up uncovering more than they could possibly have imagined. Reading the book was a wild ride. I read it in two days. :)


Critically acclaimed author Steven James has penned 30+ books spanning the genres of psychological thrillers, dramas,YA fantasy, and more. Steven has received wide critical acclaim for his work, including four Storytelling World Honor awards, two Publishers Weekly starred reviews, and 2009, 2011 & 2012 Christy Awards for best suspense. His thriller, The Queen, won the 2012 Christy Award for Best Suspense Novel, the 2012 ECPA for Best Christian Novel, and it was a finalist for an International Thriller Award. His first novel in the Patrick Bowers series, The Pawn, was optioned by ABC Studios in 2010.

Steven earned a Master's Degree in Storytelling from ETSU in 1997 and is an active member of International Thriller Writers, The Authors Guild, Mystery Writers of America, and International Association of Crime Writers.

Steven serves as a contributing editor to Writer's Digest. He appears regularly as a keynote speaker at events throughout North America.

Available November 2012 at your favorite bookseller from Revell, a division of Baker Publishing Group.