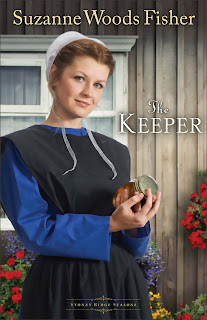 Julia Lapp has planned on marrying Paul Fisher since she was a girl. Now twenty-one, she looks forward to their wedding with giddy anticipation. When Paul tells her he wants to postpone the wedding--again--she knows who is to blame. Perpetual bachelor and spreader of cold feet, Roman Troyer, the Bee Man.

Roamin' Roman travels through the Amish communities of Ohio and Pennsylvania with his hives full of bees, renting them out to farmers in need of pollinators. He relishes his nomadic life, which keeps him from thinking about all he has lost. He especially enjoys bringing his bees to Stoney Ridge each year. But with Julia on a mission to punish him for inspiring Paul's cold feet, the Lapp farm is looking decidedly less pleasant.

Can Julia secure the future she's always dreamed of? Or does God have something else in mind?


Full of the plot twists and surprises her fans love, The Keeper is the first in a new series by bestselling author Suzanne Woods Fisher. Through touching family relationships and trials of the heart, Fisher's vivid characters grapple with yielding to God's will when it doesn't match their own.

My Review:
I really enjoyed this latest Amish book by Suzanne Woods Fisher. I loved her first series and although this is the same town this book starts a new series. The characters and plot are engaging and kept me reading. The book flowed good and the writing was good. The ending has a surprise that I did not see coming. Although kind of sad the ending was still good and fit the book. I look forward to reading book two in the series. Recommended. :)

Suzanne Woods Fisher is the bestselling author of The Choice, The Waiting, The Search, and The Keeper, as well as nonfiction books about the Amish, including Amish Peace. Her interest in the Anabaptist cultures can be directly traced to her grandfather, W.D. Benedict, who was raised in the Old Order German Baptist Brethren Church in Franklin County, Pennsylvania. Suzanne is a Christy Award nominee and is the host of an internet radio show called Amish Wisdom and her work has appeared in many magazines. She lives in California.


“Available January 2012 at your favorite bookseller from Revell, a division of Baker Publishing Group.”

It’s a “Honey of a Giveaway” from Suzanne Woods Fisher!

Suzanne is hosting a "honey of a giveaway"during the blog tour for The Keeper! During 1/3-1/17 you can enter to win an iPad2 from Suzanne and connect with her on January 17th at The Keeper Facebook Party!

During the giveaway one Grand Prize winner will receive a Prize Pack valued at $600:

But wait there's more! Just click one of the icons below to enter, then on 1/17 join Suzanne for The Keeper Facebook Party! During the party Suzanne will announce the winner of the "Honey" of an iPad Giveaway and host a fun book chat and give away some fun "honey" inspired prizes - It'll be 'sweet"!

RSVP early and tell your friends!

Since you speak so highly of Suzanne, I am going to buy this one !

Unfortunately I cant buy one now, As an edition is not available in my country, That's so sad.

But I will do.

I also greatly enjoyed this book. Looking forward to the next in the series!

Hi Brittainie! Thanks so much for being a part of the blog tour and for recommending my book to your readers. Blessings to you in 2012. Warmly, Suzanne