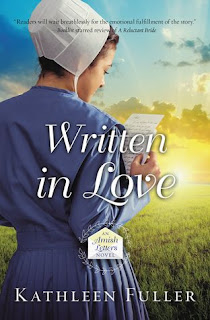 When a postal error creates pen pals of two young Amish people, can they put behind their past mistakes to see the bright future God has written for them?

Jalon Chupp has a past he isn’t proud to claim. He’s worked hard to overcome his youthful mistakes, and he has recommitted himself to his faith. When he receives a sweet note included in a piece of misdirected mail, he can’t help but write back. Soon, the letters he receives from Phoebe are the highlights of his days, and with a hopeful heart, he suggests they meet in person.

Phoebe, too, looks forward to every single one of Jalon’s letters. Living with her overbearing aunt, Phoebe doesn’t have too much to look forward to. But when Jalon suggests they meet, she panics—although she has shared some of the deepest longings of her heart with him, she hasn’t been entirely truthful about her past. But when Jalon shows up at her aunt’s doorstep, everything is revealed. And she can only pray he’ll forgive her for holding back the truth.

In order to reach beyond the errors of their pasts, both Phoebe and Jalon must put their faith in something—or Someone—bigger than either of them could pen.

Written in Love is the first book in a new series called An Amish Letters. The plot was interesting and different than most other Amish books. Phoebe and Jalon end up being pen pals after one of Jalon's letters was accidently delivered to Phoebe and she wrote him back. They both have big secrets they are keeping from each other. The characters were well developed. There are some minor characters I hope we see in the next book in the series. The romance between Phoebe and Jalon is sweet. They both have had it rough in life so they are not perfect. I guessed the big secrets before they were revealed. The author waits a little late to reveal them. I enjoyed reading this Amish Christian fiction book. Recommended.


Kathleen Fuller is the author of several bestselling novels, including the Hearts of Middlefield novels, the Middlefield Family novels, and the Amish of Birch Creek series, as well as a middle-grade Amish series, the Mysteries of Middlefield. Visit her online at www.kathleenfuller.com, Twitter: @TheKatJam, and Facebook: Kathleen Fuller.