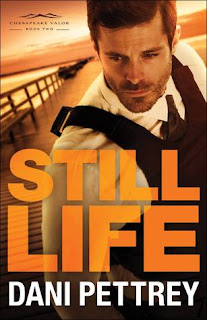 Blacklisted in the photography business over a controversial shot, Avery Tate answered an ad for a crime scene photographer. She expected to be laughed at, but crime scene analyst Parker Mitchell hired her outright--and changed her life. But six months ago, when her feelings for Parker became too strong, she left his employ to sort out her heart.

Now, for the first time, Avery is facing the world that rejected her to attend the gallery opening of a photography exhibit and support her best friend, who modeled for the show. But the only image of her friend is a chilling photo of her posing as if dead--and the photographer insists he didn't take the shot. Worse, her friend can't be found. She immediately calls Parker for help. As Avery, Parker, and his friends in law enforcement dig into the mystery, they find themselves face-to-face with a relentless and deadly threat.

This is book two in the Chesapeake Valor series. I have read book one and loved it. This book was just okay for me. It had a lot going on and many characters. I can understand needing to set up for the next book in the series though. The true main focus of this book is Avery and Parker. I thought some of the characters needed a little more developing. The plot was interesting and detailed. It had a couple plot twists. Avery and her friend Skylar have been friends for a long time. Avery has a bad past that Parker does not know about. Searching for Skylar has forced her to reveal some of it to him. After they confirm Skylar is dead, they realize Avery's life might be in danger. Parker shows he cares about her by wanting to keep her safe. She stopped working for Parker in the first book because she cared too much for him and he was still in love with his dead wife. Will they ever find true love together? Overall this was a good Christian mystery suspense romance book. I can't wait to read book three in the series. Read book one first.

Dani Pettrey is the bestselling author of the Alaskan Courage series and winner of the 2014 Daphne du Maurier award for Inspirational Novel, the 2014 Christian Retailing's Best Award for Suspense, and the 2013 Holt Medallion for First Novel. She and her husband reside in the D.C. Metro area. She can be found online at www.danipettrey.com.