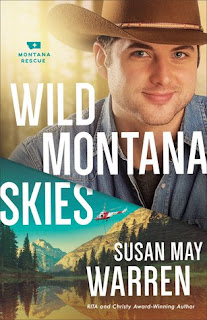 Search and rescue pilot Kacey Fairing is home on leave in Mercy Falls, Montana, twelve years after she joined the military to escape the mistakes of her past. With a job waiting for her as the new lead pilot of Peak Rescue in Glacier National Park, Kacey hopes to reconnect with the now-teenage daughter she sees only between deployments. What she doesn't realize is that someone else is also back in town.

Ben King has been building his country music career since the day Kacey shut him out of her life. Now all of that's on hold when his injured father calls him home to help run Peak Rescue until he's fully recovered. It doesn't take long, though, to discover his father's ulterior motives as Kacey Fairing walks into the house and back into his heart.

With Mercy Falls in a state of emergency due to flash floods, Kacey and Ben are forced to work together to save lives. But when floodwaters turn personal, can they put aside the past to save their future?

This was a good Christian romance book. It is the first book in a new series called Montana Rescue. The series is set in Mercy Falls, Montana. There are actually two romance stories going on in this book. The main one is between Kacey and Ben. They were teen sweethearts that made a common error and ended up with a baby. Due to a misunderstanding Ben does not know he has a baby. The baby is now a teenager herself. Things are complicated by the fact Ben did go on to be a Country music star. Kacey joined the military but is on home on leave after being injured. She already has issues with her daughter from being gone so much. Ben's dad runs a rescue service and calls him home to help after he is seriously hurt. But is his dad also playing matchmaker? The plot and characters were well developed and held my attention from the beginning. The romance was believable and sparks flew between Kacey and Ben. The setting was interesting. The second romance in the background was between Sierra and her boss Ian. Apparently there was a prequel online book and they were in it. The plot line for them will continue on into the next book. This was a good start to the new series and I can't wait to read the next book. Susan May Warren is one of my favorite authors.

Susan May Warren is the ECPA and CBA bestselling author of over fifty novels with more than one million books sold. Winner of a RITA Award and multiple Christy and Carol Awards, as well as the HOLT and numerous Reader's Choice Awards, Susan has written contemporary and historical romances, romantic suspense, thrillers, romantic comedy, and novellas. She can be found online at www.susanmaywarren.com, on Facebook at SusanMayWarrenFiction, and on Twitter @susanmaywarren