Sister Eve and the Blue Nun by Lynne Hinton (Review) 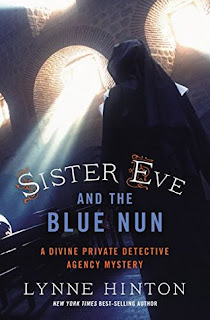 After a murder at the monastery, Sister Eve may need a miracle if she is to prove a dear friend isn’t a cold-blooded killer.

Sister Eve, a motorcycle-riding nun with a natural (or is it supernatural?) gift for solving murders returns to the enclave she once called home and quickly finds herself confronting yet another mysterious death.

Someone has poisoned Dr. Kelly Middlesworth—a researcher on the life and ministry of 17th-century’s revered “Blue Nun”—and a set of irreplaceable historic documents have disappeared before they could even be examined.

When all evidence seems to point to the victim’s brother, Sister Eve sets out to expose the killer and learn the explosive truth those missing manuscripts might contain.

Chasing a killer is dangerous work, and as her two worlds collide, Sister Eve may need some heavenly help simply to survive.

This is book three in the Divine Private Detective Agency Mystery series. I have not read the first two. The mystery is completely new and not continued from the first two books from what I can tell. I did feel a little lost at times on the background between some of the characters. The main character is Sister Eve Divine. She is a nun struggling to find her place. She is considering leaving the order. Her father used to be on the police force and now has a private detective agency. In the first two books of the series she helped him solve mysteries. In this book it mostly her. He supports her and gives her tools she might need like a gun. I do not like the fact she lies a lot. She does not act like a nun at all. She tampered with the crime scene and it did not seem to bother her. The mystery itself is okay. It was not very complicated or grabbing. I thought the spiritual aspect needed more developing. The best part of the book is a new detective named Earl Lujan. Sister Eve has feelings for him she is not used too. It was not developed as a plot line just mentioned. Hopefully the next book will tie that in. I would start with book one in this series. The premise of the series is interesting.

Lynne Hinton is the New York Times bestselling author of Friendship Cake and Pie Town. A native of North Carolina, she received her undergraduate degree from the U.N.C. at Greensboro and her Masters of Divinity degree from Pacific School of Religion in Berkeley, California. She also studied at Wake Forest University and the NC School of the Arts, School of Filmmaking. She has served as a chaplain with hospice and as the pastor of Mount Hope United Church of Christ and First Congregational United Church of Christ, both in North Carolina. Lynne is a regular columnist with The Charlotte Observer . She lives with her husband, Bob Branard, in Albuquerque, New Mexico. Visit her online at lynnehinton.com Facebook: Lynne-Hinton-Books


Review copy provided by Litfuse Publicity in exchange for an honest review.
- June 05, 2016