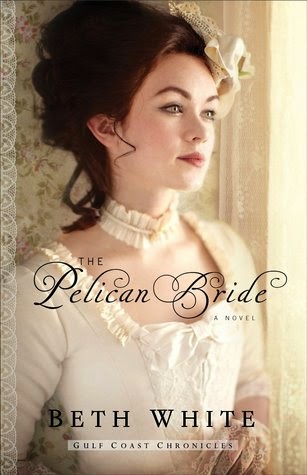 She's come to the New World to escape a perilous past. But has it followed her to these far shores?

It is 1704 when Frenchwoman Geneviève Gaillain and her sister board the frigate Pélican bound for the distant Louisiana colony. Both have promised to marry one of the rough men toiling in this strange new world in order to escape suffering in the old. Geneviève knows life won't be easy, but at least here she can establish a home and family without fear of persecution for her outlawed religious beliefs.

When she falls in love with Tristan Lanier, an expatriate cartographer-turned-farmer whose checkered past is shrouded in mystery, Geneviève realizes that even in this land of liberty one is not guaranteed peace. Trouble is brewing outside the fort between the French colonists and the native people surrounding them. And an even more sinister enemy may lurk within. Could the secret Geneviève harbors mean the undoing of the colony itself?

I thought this was a okay Christian historical fiction book. The plot, setting, and characters were interesting and keep my attention. The cover is beautiful but not fitting to the book. This is not a setting used very often it seems in Christian fiction. It is set in the early 1700s in Louisiana colony. In the book everything is described as primitive.  I wanted to pop Genevieve's sister many times. She is very immature. Tristan and Genevieve have sparks from the first time they meet but they get married in a spur of the moment without having spent much time together. It did not make sense and then he left for a trip. She is a wanted criminal and not a follower of the Catholic church which at that time was a crime too. One of the Pelican brides brought over from France to marry settlers and help civilize the land the story semi follows some of the other girls. The conclusion was satisfying. Recommended to fans of the genre.


Beth White's day job is teaching music at an inner-city high school in historic Mobile, Alabama. A native Mississippian, she is a pastor's wife, mother of two, and grandmother of one--so far. Her hobbies include playing flute and pennywhistle and painting, but her real passion is writing historical romance with a Southern drawl. Her novels have won the American Christian Fiction Writers Carol Award, the RT Book Club Reviewers Choice Award, and the Inspirational Reader's Choice Award. Visit www.bethwhite.net for more information.