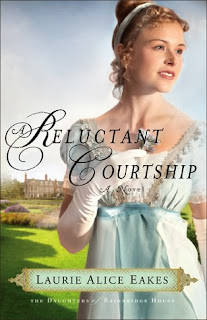 Honore Bainbridge has been courted by two men, one of whom turned out to be a traitor, the other a murderer. Banished to her family's country estate, where she will hopefully stay out of trouble, she finally meets the man she is sure is exactly right for her: Lord Ashmoor. Tall, dark, and handsome--what more could a girl ask for? But he too is under suspicion because of his American upbringing and accusations that he has helped French and American prisoners escape from Dartmoor Prison. For his part, Lord Ashmoor needs a wife beyond reproach, which Honore certainly is not. Amid a political climate that is far from friendly, Honore determines to help Ashmoor prove his innocence--if she can do so and stay alive.

From the rocky cliffs of Devonshire, England, comes the exciting conclusion to the lush Daughters of Bainbridge House series. Award-winning author Laurie Alice Eakes thrusts her readers into high drama from the very first sentence and keeps them on their toes until the final page.

I loved this book. It is the third in the Daughters of Bainbridge House series and can stand alone. Honore's character and reputation might not make as much sense without the background found in the first two though. The first two books were good and had each of her sisters as the main character. In this book Honore is at the family estate with her hired companion, a distant relation of one of her brother in laws. They get along fine but Honore still feels the snubs of her peers. Lord Ashmoor comes along and they are attracted to each other but both have reservations. His are stronger though. His father left England with scandal and it has not been solved so he is trying to salvage the family reputation. He needs a wife that is high class and above reproach. They band together to solve the mystery of the missing prisoners and his father's crime. The plot and characters were interesting and unique. The regency time period in England is one of my favorites. Highly Recommended. :)

Laurie Alice Eakes is the author of Lady in the Mist, Heart's Safe Passage, Choices of the Heart, A Necessary Deception, and A Flight of Fancy, which won the October 2012 Clash of the Titles Award, voted on by readers. She won a National Readers Choice Award for Best Regency in 2007 for Family Guardian. Laurie Alice writes full-time from her home in Texas, where she lives with her husband and sundry dogs and cats. Visit www.lauriealiceeakes.com

Review copy provided by Revell/Baker in exchange for an honest review.

Available October 2013 at your favorite bookseller from Revell, a division of Baker Publishing Group.
- October 20, 2013