I loved this book and my review will come when I get back from vacation. They are already yelling at me to hurry up. lol :)

From Susan: I've always loved reading, history, and horses. These things come together in several of my historical books. My young adult novel, Sarah's Long Ride, also spotlights horses and the rugged sport of endurance riding, as does the contemporary romance Trail to Justice. I took a vocational course in horseshoeing after earning a bachelor's degree in history. I don't shoe horses anymore, but the experience has come in handy in writing my books.

Another longtime hobby of mine is genealogy, which has led me down many fascinating paths. I'm proud to be a DAR member! Some of Jim's and my quirkier ancestors have inspired fictional characters.

For many years I worked for the Central Maine Morning Sentinel as a freelancer, covering local government, school board meetings, business news, fires, auto accidents, and other local events, including a murder trial. I've also written many profiles and features for the newspaper and its special sections. This experience was a great help in developing fictional characters and writing realistic scenes. I also published nonfiction articles in several magazines and had several short stories appear in Woman's World, Grit, and Alfred Hitchcock's Mystery Magazine.

My husband, Jim, and I moved to his birth state, Oregon, for a while after we were married, but decided to move back to Maine and be near my family. We're so glad we did. It allowed our six children to grow up feeling close to their cousins and grandparents, and some of Jim's family have even moved to Maine!

Our children are all home-schooled. The two youngest are still learning at home. Jim recently retired from his vocation as an editor at a daily newspaper, and we’ve moved from Maine to Kentucky. 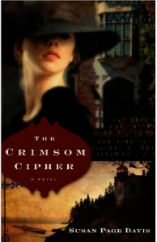 IT'S 1915, AND EMMA SHUSTER HAS FAR TOO MUCH ON HER MIND TO ENTERTAIN NOTIONS OF ROMANCE...

A female Navy cryptographer seeks to save lives...and uncover her father’s killers.

In 1915, German sympathizers escalated acts of sabotage in the United States to keep the nation from joining in the war. With enemies lurking at every turn, whom can Emma trust? Is romance the true motive behind her tow suitors advances? Or could one-or both of them-have traitorous intentions in mind?

Following the mysterious murder of Emma Shuster’s father, Lt. John Patterson invites Emma to become a Navy cryptographer because of the expertise she gained in helping her father develop a cipher system.

Emma races to discover the nefarious plans of her country's foes and unmask their leader before others are killed. She finds new strength in her faith as she strives to outwit her adversary, known only as Kobold - German for goblin.

And yet, her greatest challenge may be deciphering the cryptic messages her heart sends whenever she encounters a certain navy lieutenant... Can Emma and John find love in the midst of turmoil as America plunges toward war?