A Portrait of Emily Price by Katherine Reay (Review) 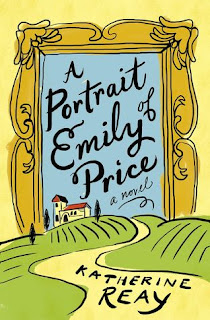 Emily Price—fix-it girl extraordinaire and would-be artist—dreams of having a gallery show of her own. There is no time for distractions, especially not the ultimate distraction of falling in love.
But Chef Benito Vassallo’s relentless pursuit proves hard to resist. Visiting from Italy, Ben works to breathe new life into his aunt and uncle’s faded restaurant, Piccollo. Soon after their first meeting, he works to win Emily as well—inviting her into his world and into his heart.

Emily astonishes everyone when she accepts Ben’s proposal and follows him home. But instead of allowing the land, culture, and people of Monterello to transform her, Emily interferes with everyone and everything around her, alienating Ben’s tightly knit family. Only Ben’s father, Lucio, gives Emily the understanding she needs to lay down her guard. Soon, Emily’s life and art begin to blossom, and Italy’s beauty and rhythm take hold of her spirit.

Yet when she unearths long-buried family secrets, Emily wonders if she really fits into Ben’s world. Will the joys of Italy become just a memory, or will Emily share in the freedom and grace that her life with Ben has shown her are possible?

This was a good Christian fiction romance book. Emily and Ben connect from the first time they meet. It is hard to believe that they would marry after only knowing each other two weeks though. Emily then goes back to Italy with him. I love the author's descriptive writing. I felt like I was in the book. The first half is set in Atlanta and the second mostly in Italy. There were some supporting characters also. I liked Ben's sister and his father. I never warmed up to his mother. The first part was like a fairy tale and the second half reality. Emily  runs into issues being in a country she doesn't speak the language and with people she does not know. Some of Ben's family is welcoming and some not so much. It is not a fast paced book which was fine with me as I enjoyed the descriptions. The conclusion is satisfying. Recommended to fans of Christian romance fiction.

Katherine Reay has enjoyed a life-long affair with the works of Jane Austen and her contemporaries—who provide constant inspiration both for writing and for life. She is the author of three previous novels, and her debut, Dear Mr. Knightley, was a 2014 Christy Award Finalist, winner of the 2014 INSPY Award for Best Debut, and winner of two Carol Awards for Best Debut and Best Contemporary. Katherine holds a BA and MS from Northwestern University and is a wife, mother, runner, and tae kwon do black belt. After living all across the country and a few stops in Europe, Katherine and her family recently moved back to Chicago. Visit her on line at katherinereay.com Facebook: katherinereaybooks Twitter: @Katherine_Reay


Review copy provided by publisher in exchange for an honest review.
- February 22, 2017

Email ThisBlogThis!Share to TwitterShare to FacebookShare to Pinterest
Labels: A Portrait of Emily Price, Katherine Reay