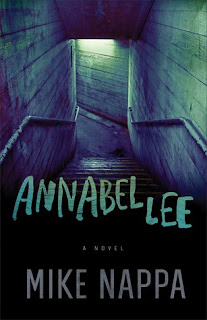 Fourteen miles east of Peachtree, Alabama, a secret is hidden. That secret's name is Annabel Lee Truckson, and even she doesn't know why her mysterious uncle has stowed her deep underground in a military-style bunker. He's left her with a few German words, a barely-controlled guard dog, and a single command: "Don't open that door for anybody, you got it? Not even me."

Above ground, a former Army sniper called The Mute and an enigmatic "Dr. Smith" know about the girl. As the race begins to find her, the tension builds. Who wants to set her free? Why does the other want to keep her captive forever? Who will reach her first?

Private investigators Trudi Coffey and Samuel Hill need to piece together the clues and stay alive long enough to retrieve the girl--before it's too late.

With its stunning writing and relentless pace, Annabel Lee will captivate readers from the first page.

This was a great mystery/suspense book. I enjoyed reading it even with the violence factor. I was able to skim over those parts. The premise is interesting and different. It is gritty and fast paced. It is not a cookie cutter book by any means. The characters and plot were well developed and well written. This is the first book in the Coffey and Hill series. Trudi Coffey and Samuel Hill are ex spouses and used to have a detective agency together. Trudi still works there while she has no idea where her ex husband is most of the time. It was not a nice divorce. Their relationship is in the background as a secondary plot line. The main plot line involves a little girl named Annabel Lee. She has an unusual life with the man she knows as Uncle Truck. One day he puts her in an underground bunker with a guard dog and tells her to not open the door unless it is him with the code words. After Truck and most of his men are murdered, the killers led by a mysterious Dr. Smith burn down the house. Luckily Truck planned for something like this. Sam worked undercover in the military with him and he entrusted a key to him in case this happened. The Mute is one of Truck's men that is left and he contacts Sam to get the key to free the girl. We wonder about the real identity of Dr. Smith for most of the book. I never imagined why the little girl would be so important. It will blow your mind. The ending fit the book. The only draw back was the Christian aspect was slim mainly in the form of Trudi's faith. I still can't wait to read the next book in the series. Recommended.

Mike Nappa is an entertainment journalist at PopFam.com, as well as a bestselling and award-winning author with more than one million books sold worldwide.

Learn more about Mike at: http://nappaland.com

Review book provided by publishers in exchange for an honest review.