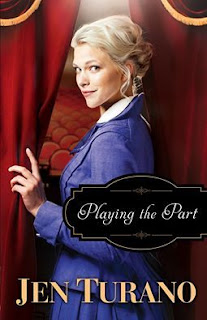 Lucetta Plum is an actress on the rise in New York City, but is forced to abandon her starring role when a fan's interest turns threatening. Lucetta's widowed friend, Abigail Hart, is delighted at the opportunity to meddle in Lucetta's life and promptly whisks her away to her grandson's estate to hide out.

Bram Haverstein may appear to simply be a somewhat eccentric gentleman of means, but a mysterious career and a secret fascination with a certain actress mean there's much more to him than society knows.

Lucetta, who has no interest in Abigail's matchmaking machinations, has the best intentions of remaining cordial but coolly distant to Bram. But when she can't ignore the strange and mysterious things going on in his house, it'll take more than good intentions to keep her from trying to discover who Bram is behind the part he plays.

This was a light and somewhat funny historical fiction book. This is book three in a series but can stand alone. The first two books were about Lucetta's friends. This book focuses on her and Bram. The friends do make an appearance so we see how their stories ended. The plot is full of crazy happenings. I turned the page not sure what I was going to read next which was mostly okay. Lucetta's friend and mentor, Abigail, has an eccentric nephew named Bram. When Lucetta's gambling stepfather loses her in a hand and the man comes after her, Lucetta turns to Abigail. Abigail's solution is to seek out her estranged nephew to stay with him. She is estranged because of her daughter. Her daughter did not want her to interfere in her children's lives like she did with her. Abigail is a matchmaker. From the beginning it seems like she planned for Lucetta and Bram to fall for each other. There is not really a overtly spiritual element for it to be a Christian fiction book. Although many events were hard to believe in the book overall I enjoyed reading it.

Jen Turano is the best-selling, critically acclaimed author of The Ladies of Distinction series, and A Class of Their Own series, published through Bethany House Publishers. Her novel, After a Fashion, was chosen as a top pick from Romantic Times, as well as being named a top ten romance of 2015 from Booklist. Her book, A Most Peculiar Circumstance, was chosen as a top ten romance by Booklist in 2013. Her seventh book, Playing the Part, will release in the spring of 2016, followed by a new four-book series, The Wallflowers. When she's not writing, Jen spends her time outside of Denver with her husband and neurotic Cattle Dog, enjoying life as an empty-nester because her son recently abandoned her for the college life. She can be found on Facebook at https://www.facebook.com/jenturanoauthor/ or visit her on the web at www.jenturano.com

Review copy provided by publisher in exchange for an honest review.
- April 06, 2016