What Matters Most by Kellie Coates Gilbert (Review) 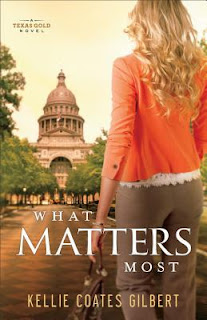 Leta Breckenridge is forced to drop out of college to care for her dementia-ridden mother. After learning a severely delinquent account may force her mother into a less desirable facility, Leta steps out of her comfort zone and lands a high-paying job at an Austin public relations firm. But her dream job turns into a nightmare when she learns the firm is a front for a political opposition machine--and that the research she's been collecting will be used against her new love interest, Nathan Emerson.

Nathan is a rising political star being pressured to run a bid to unseat the current governor of Texas. He's already in a relationship with a woman much better suited to be a politician's wife, but he's never met anyone like Leta. Could this feisty, challenging woman hold the key to his heart?

This is book three in the Texas Gold Collection. The characters and plot are separate. The main focus in this book is Leta and Nathan. Leta is a college dropout who has two jobs and is taking care of her mother who has bad dementia. Nathan is a senator that many people want to run for Governor including his family and girlfriend. Leta and Nathan meet at her second job at a grocery store. They have a minor automobile accident. The attraction is there from the beginning which is complicated by both of their lives. Leta lands a big job at a local PR firm. What she does not know is that they are a political opposition firm and have been hired to work against Nathan. She immediately feels guilty and wants to quit but can't because of her mother. Her relationship with Nate progresses slowly since he has a real girlfriend. He knows that he needs to break up with one of them. The truth always comes out though. The book is well written and held my attention from the beginning. The ending wrapped up too neatly though. There is not a lot of Christian for this to be a Christian fiction book. Overall a good book.


Kellie Coates Gilbert is a former legal investigator and trial paralegal and the author of A Woman of Fortune, Where Rivers Part, and A Reason to Stay. Gilbert crafts her emotionally charged stories about women in life-changing circumstances in Dallas, Texas, where she lives with her husband. Learn more at www.kelliecoatesgilbert.com

Email ThisBlogThis!Share to TwitterShare to FacebookShare to Pinterest
Labels: What Matters Most