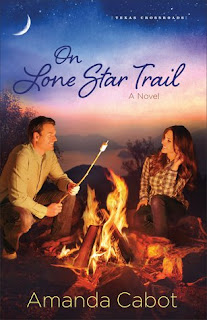 If there's one thing Gillian Hodge never wants to see again, it's a man on a motorcycle. Her last encounter with one left her right hand crushed, ending her promising career as a concert pianist. But as she heads to Rainbow's End Resort, a sudden thunderstorm causes a motorcycle to crash in front of her.

When TJ Benjamin's wife died, he lost more than his best friend; he lost his faith. He's spent the past year wandering the country on a motorcycle, trying not to think about his future. When he finds himself stranded with a busted bike and a reluctant rescuer, he has to wonder about God's sense of humor.

Can this woman without a future and this man running from his past find romance in the present? Or are they too tied to the way life used to be?

I loved this book. It is book three in the Texas Crossroads series. The setting and characters are the same with the addition of T J Benjamin. You do find out more of what happened to the main characters in the first two books so if that bothers you read the series in the order. I enjoyed reading all three of them. The main two characters in this story are Gillian and T J. They had good chemistry from the beginning. I liked the plot line and the author did a good job developing it and the characters. The setting was unique and I liked it. Rainbow's End Resort is an interesting idea. Overall a good contemporary Christian romance book.


Complete my profile
With both parents avid readers, it's no surprise that Amanda Cabot learned to read at an early age. From there it was only a small step to deciding to become a writer. Of course, deciding and becoming are two different things, as she soon discovered. Fortunately for the world, her first attempts at fiction, which included a play for her fifth grade class entitled "All About Thermometers," were not published, but she did meet her goal of selling a novel by her thirtieth birthday. Since then she's sold more than thirty novels under a variety of pseudonyms. When she's not writing, Amanda enjoys sewing, cooking and - of course - reading.

Review copy provided by publisher in exchange for an honest review.
- March 17, 2016