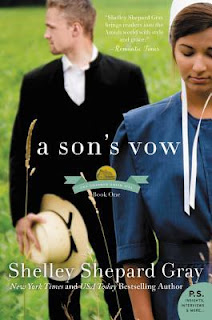 Three months ago, everything changed for Darla Kurtz and her family. Darla’s father was responsible for a terrible fire at Charm’s lumber mill which killed five Amish men. And though he, too, lost his life, the town of Charm hasn’t looked at her family the same since. Even Lukas Kinsinger—with whom Darla used to have a close friendship.

Now her brother’s anger at the town is spilling over onto Darla, and she has the bruises to prove it. The accident already cost five lives, but if something doesn’t change soon, Darla fears it will cost her—and her family—even more.

Lukas Kinsinger wants to mourn the loss of his father, but he can hardly find the time to breathe. Suddenly the head of his father’s lumber mill and responsible for taking care of his three siblings, he’s feeling the pressure. He has also never felt more alone—especially with the new tension between he and Darla. But when he learns of her troubles at home, Lukas knows he can’t simply stand by and watch. Someone has to help her before another tragedy occurs.

As Lukas and Darla attempt to repair their families, they discover something deeper than friendship growing between them. But will Lukas and Darla’s love be accepted after so much loss? Or will the pain of the past overcome any chance of future happiness?

This is the first book in the Charmed Amish Life series by Shelley Shepard Gray. It is set in Charm, Ohio. The main plot revolves around the Kinsinger siblings. They lost their father who was also the mill owner in the big fire. All of them except one work at the mill. They grew up with the Kurtz siblings whose father worked at the mill until he died in the fire. The Kurtz father is blamed for starting the fire in the first place so they have endured hate and abuse from the town since. Lukas Kinsinger was good friends with Darla Kurtz before the fire and misses her friendship and maybe something more. His brother has nothing but anger toward the Kurtz family. And her brother blames the mill for the Kurtz father's death and he works there. The plot was interesting and had good subplot. The characters were okay. The subject matter and atmosphere of the book could be a little intense at times. I look forward to seeing where the series goes and how the characters develop.


Review copy provided by Litfuse Publicity in exchange for an honest review.