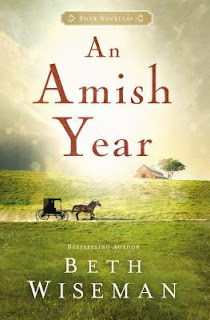 Spend a year in Amish country with four sweet romances.

Rooted in Love (previously published in An Amish Garden)
Rosemary Lantz is doing her best to run her family’s household. She excels at all her tasks except one: gardening. Saul Petersheim has pursued Rosemary for years, but Rosemary keeps turning him down. What Saul doesn’t know is that she has good reason—something no one can know—especially not him.

A Love for Irma Rose
The year is 1957, and young Irma Rose has a choice to make. Date the man who is “right” for her? Or give Jonas a chance, the wild and reckless suitor who refuses to take no for an answer?  Irma Rose steps onto the path she believes God has planned for her, but when she loses her footing, she is forced to rethink her choice.

Patchwork Perfect
Eli Byler has been a widower for two years when he chooses to make a fresh start in Paradise, Pennsylvania. As Eli juggles the admiration of two women, he meets Miriam Fisher—the most unconventional Amish woman he’s ever met. She doesn’t fit the mold for what Eli is looking for, but it isn’t long before Eli realizes that Miriam is everything he wants. But Miriam has no plans to get married—ever.  Will Eli be able to change her mind?

When Christmas Comes Again (previously published in An Amish Second Christmas)
Katherine knows the first Christmas without Elias will be hard for her and the children. But when a mysterious Englischer appears with photographs of her late husband, Katherine begins to wonder what other blessings Christmas could have in store.

I was disappointed to find out that two of the four stories in this collection were previously published.  I have both of those books so I should have realized it. I still enjoyed reading them. I like the easy to read sweet Amish stories. The other two collections were really good. So whether you get this one or the other two or all of them, you are getting some good stories. :)

Award-winning, bestselling author Beth Wiseman is best known for her Amish novels, but she has also written several successful contemporary novels, set primarily in her beloved Texas, including Need You Now and The House that Love Built. Both have received glowing reviews. Beth's The Promise is inspired by a true story. Website: www.bethwiseman.com Twitter: @bethwiseman Facebook: Fans-of-Beth-Wiseman