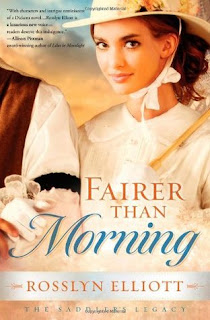 Ann dreams of a marriage proposal from her poetic suitor, Eli―until Will Hanby shows her that nobility is more than fine words.

On a small farm in 19th-century Ohio, young Ann Miller is pursued by the gallant Eli Bowen, son of a prominent family. Eli is the suitor of Ann's dreams. Like her, he enjoys poetry and beautiful things and soon, he will move to the city to become a doctor.

Ann travels to Pittsburgh, accompanying her father on business. There she meets Will Hanby, a saddle-maker's apprentice. Will has spent years eking out an existence under a cruel master and his spirit is nearly broken. But Ann's compassion lights a long-dark part of his soul. Through his encounters with Ann's father, a master saddler, Will discovers new hope and courage in the midst of tremendous adversity.

When the Millers must return to Ohio and their ministry there, Will resolves to find them, at any cost.
If Will can make it back to Ann, will she be waiting?

The characters and plot were interesting. It was well written. The romance felt like it was secondary to the plot though. I liked the time period and all the historical details. I could feel the emotions of the characters. Ann  and Will are the main characters in the story although there are some interesting secondary characters too. There was some intrigue, action, and romance. Overall there was a strong faith message. Recommended to fans of deeply historical Christian fiction books.


Rosslyn Elliott's historical fiction won two 2012 Carol Awards and was named as one of Lifeway Fiction's Top Ten Reads of 2011. She has published three critically-acclaimed novels and a book of plays for young people. Rosslyn teaches literature and drama and lives with her husband, daughter, dogs, cats, and horses.


Review copy provided by BookLook in exchange for an honest review.
- December 13, 2015

Email ThisBlogThis!Share to TwitterShare to FacebookShare to Pinterest
Labels: Fairer than Morning