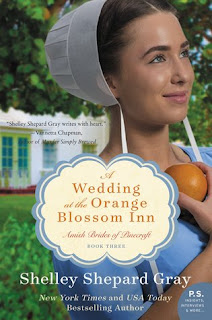 Emma Keim was heartbroken when her husband, Sanford, passed away, leaving her to raise three young daughters alone. Though several years have passed, her relatives have made it no secret that they expect Emma to remain a widow, mourning Sanford indefinitely. But when she meets Jay Hilty—a handsome widower with three young sons of his own—Emma is delighted to have a new friend who understands her struggles. Still, she is dismayed that her family is so opposed to their friendship—and the idea of it ever becoming anything more. She honors her husband's memory every day, but is she destined to be alone forever?

Emma's gentleness with Jay's boys stirs something in his heart that's been quiet for far too long. But when his oldest son becomes engaged to a local woman, suddenly Jay, Emma, and their children are swept up in wedding preparations. Witnessing his son's joy, Jay wonders if it's time for him to move forward, too, and find happiness again.

Once again, love has come to Pinecraft. But can these two parties of four become a happy, healthy family of eight?

A Wedding at Orange Blossom Inn is the third book in the Pinecraft Brides series. I have enjoyed reading all of them. The two main characters of this story are Emma and Jay. There were many supporting characters including all of the children they each have. Emma has three young girls and Jay has three sons. They add really interesting side plots to the book. There are complications of course. Emma's parents and ex in laws do not want her to move on and remarry. A major side plot develops with Jay's oldest son. He falls in love with the lady who runs the Orange Blossom Inn's niece. At one point it kind of felt like that plot was taking over the main plot of Jay and Emma. But overall the story worked together. There were many funny moments including one pizza loving dog. I love this series. I recommend reading them in order as most of the character's stories keep going in the next book. The Orange Blossom Inn and Beverly are the backbones of the whole series. I can't wait to read the next book in the series which promises to focus mainly on Beverly's story.

Review copy provided by publisher in exchange for an honest review.
- September 29, 2015

Email ThisBlogThis!Share to TwitterShare to FacebookShare to Pinterest
Labels: A Wedding at the Orange Blossom Inn, Shelley Shepard Gray