Gone Without a Trace by Patricia Bradley (Review) 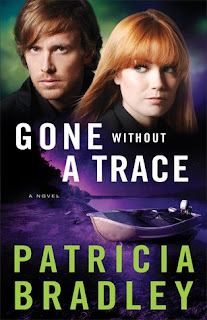 It's been more than two years since homicide detective Livy Reynolds's cousin disappeared from Logan Point. Unlike most people in her hometown, Livy has never believed that Robyn left voluntarily. When Dallas private investigator Alex Jennings contacts Livy concerning a missing senator's daughter who was last seen in Logan Point, she notices eerie similarities between the two disappearances. But with self-doubt plaguing her and an almost instant dislike of Jennings, Livy is finding this investigation an uphill battle. With her future in law enforcement on the line, can she find a way to work with a man who is her polar opposite?

This was a good Christian mystery/suspense book. As this is a third book in a series with repeating characters I recommend reading them in order. The main focus of this book is on Livy and Alex. Her cousin Robyn disappeared more than two years ago and Livy is one of the only ones who did not buy she left voluntarily. Livy works as a Memphis Detective and Alex is a PI. Their paths cross when he is hired to find a Senator's daughter whose case has similarities to Robyn. Livy is still struggling with a decision she made in the line of duty and ends up on leave. A new clue appears on Robyn's case and Livy ends up working with Alex reluctantly. The plot and characters were well developed and interesting. I did not guess who the bad guy was until the end. The romance between Alex and Livy was good. I liked the Southern setting. The conclusion was satisfying. I recommend the whole series. I can't wait to read the next book in the series.


Patricia Bradley's manuscript for Shadows of the Past was a finalist for the 2012 Genesis Award, winner of a 2012 Daphne du Maurier award (1st place, Inspirational), and winner of a 2012 Touched by Love award (1st place, Contemporary). Also the author of A Promise to Protect, Bradley is a published short story writer and is cofounder of Aiming for Healthy Families, Inc. She is a member of American Christian Fiction Writers and Romance Writers of America and makes her home in Mississippi. Learn more at www.ptbradley.com.

Review copy provided by publisher in exchange for an honest review.
- July 29, 2015

Email ThisBlogThis!Share to TwitterShare to FacebookShare to Pinterest
Labels: Gone Without a Trace, Patricia Bradley