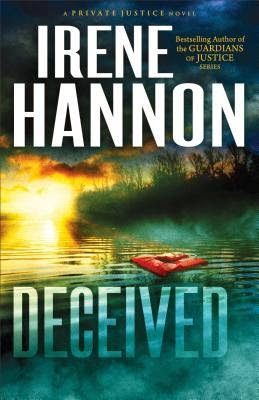 A grieving mother. A mysterious child. And a dedicated PI who's determined to solve the puzzle.
For three years, Kate Marshall has been mourning the loss of her husband and four-year-old son in a boating accident. But when she spots a familiar-looking child on a mall escalator, she's convinced it's her son. With police skeptical of her story, she turns to private investigator Connor Sullivan for help. As the former Secret Service agent digs into the case, the boating "accident" begins to look increasingly suspicious. But if Kate's son is alive, someone is intent on keeping him hidden--and may go to lethal lengths to protect a sinister secret.

I enjoyed reading this Christian suspense/mystery book. It is book three in the Private Justice series but can stand alone. It also  had a touch of romance in it between Kate and Connor.  The bad guy did not seem really bad though. Greg Sanders and his son Todd just moved to St. Louis. He is a widower and seems like a very devoted dad. But his son Todd is very similar to Kate's dead son. Kate goes to Connor and asks him to investigate after seeing them together at the mall. The plot and characters were well written and interesting. It held my attention from start to finish. This is one of my favorite authors in this genre. Recommended.


Irene Hannon is the author of more than forty-five novels, including Vanished, Trapped, and the bestselling Heroes of Quantico and Guardians of Justice series. Her books have been honored with two coveted RITA Awards from Romance Writers of America, a Carol Award, two HOLT Medallions, a Daphne du Maurier Award, two Reviewers' Choice Awards from RT Book Reviews magazine, a Retailers' Choice Award, and a National Readers' Choice Award. In addition, she is a Christy Award finalist, and Booklist included one of her novels in its "Top 10 Inspirational Fiction" list for 2011. She lives in Missouri. Learn more at www.irenehannon.com

Review copy provided by Revell in exchange for an honest review.
- October 08, 2014