It Had to Be You by Susan May Warren (Review) 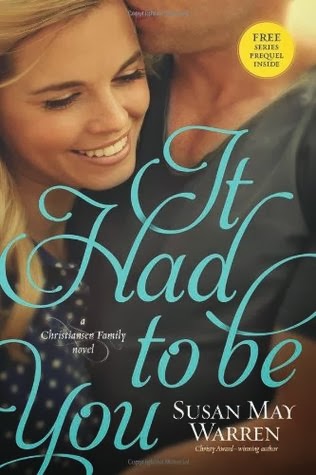 Eden Christiansen never imagined her role as her younger brother Owen’s cheerleader would keep her on the sidelines of her own life. Sure, it feels good to be needed, but looking after the reckless NHL rookie leaves little time for Eden to focus on her own career. She dreamed of making a name for herself as a reporter, but is stuck writing obits—and starting to fear she doesn’t have the chops to land a major story. If only someone would step up to mentor Owen . . . but she knows better than to expect help from team veteran and bad-boy enforcer Jace Jacobsen.

Jace has built his career on the infamous reputation of his aggressive behavior—on and off the ice. Now at a crossroads about his future in hockey, that reputation has him trapped. And the guilt-trip he’s getting from Eden Christiansen isn’t making things any easier. But when Owen’s carelessness leads to a career-threatening injury and Eden stumbles upon a story that could be her big break, she and Jace are thrown together . . . and begin to wonder if they belong on the same team after all.

I loved this latest book in the Christiansen family series. It can be read on its own but the whole series is good. Jace is the perfect hunky hero with the right amount of bad boy fallibility. Eden is a great heroine. She is stronger and smarter than she realizes. She thinks it is her life to take care of her siblings especially her brother Owen. Jace and Owen play professional hockey together. The author does a good job with just enough hockey details. The characters and the plot were well developed and unique. It held my attention from the beginning. The sparks fly between Jace and Eden in an appropriate way. Jace and Owen are not perfect. There is some alcohol and fighting in the book. It is not prominent it just adds to the realness of the characters. The conclusion is satisfying and sigh worthy. This was another great Susan May Warren love story. Highly Recommended. :)

Growing up in Minneapolis and attending the U of MN, I learned to love city life, although I'm a woodsy girl at heart. Or maybe I'm an adventurer -- having lived and traveled all over the world, including Siberia Russia as a missionary for eight years. Probably that's why my characters can't sit still, and seem to get into one scrape after another -- they're too much like me! I love God, my family, my country, my church, and feel privileged every day to be able to write stories, that I hope inspire and entertain!

Review copy provided by Litfuse Publicity in exchange for an honest review.
- March 17, 2014

Email ThisBlogThis!Share to TwitterShare to FacebookShare to Pinterest
Labels: It Had to Be You, Susan May Warren