No One to Trust by Lynette Eason (Review) 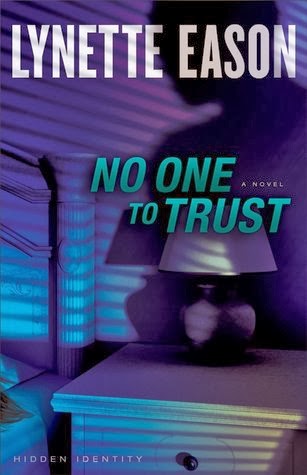 She doesn't know who she's running from--and the man she loves may be someone else entirelySummer Abernathy wakes up one morning to find her husband missing, three men in her home intent on finding him, and the life she's been living based on a lie. Which Kyle Abernathy did she marry? The computer programmer she met in line at the bank? Or the one who was apparently using that image as a cover?

The search for her husband--and answers--takes Summer ever deeper into a world of organized crime where people are used one moment and discarded the next. And with her deepest relationship of trust already shattered, Summer doesn't know who to believe.

Always thrilling, bestselling author Lynette Eason outdoes herself in this taut, breakneck story of lies, loyalties, and love that will have you up all night to discover the truth hidden in the shadows.

I thought this was an okay start to a new series. I thought the plot and characters were interesting and had potential. I felt like parts were repetitious and overall not suspenseful. I had a hard time connecting with some of the characters. Summer's sister annoyed me but that might have been the point also. Also the relationship between David and Summer bothered me a little. He was too perfect and she was a little off. The author's previous works kept me more engaged.  I am looking forward to the next book in the series. This is one of my favorite Christian romantic suspense authors. I have read most of her works.


Lynette Eason is the bestselling author of the Women of Justice series and the Deadly Reunions series. She is a member of American Christian Fiction Writers and Romance Writers of America. She has a master's degree in education from Converse College and she lives in South Carolina. Find out more at www.lynetteeason.com

Email ThisBlogThis!Share to TwitterShare to FacebookShare to Pinterest
Labels: Lynette Eason, No One to Trust