Dark in the City of Light by Paul Robertson 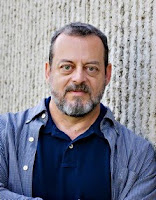 Paul Robertson is a computer programming consultant, part-time high-school math and science teacher, and the author of The Heir. He is also a former Christian bookstore owner (for 15 years), who lives with his family in Blacksburg, Virginia.

What Evil Haunts the Shadows of 1870s Paris?

Baron Ferdinand Harsanyi — After his wife's mysterious death, this Austrian attaché holds control over mines whose coveted ore could turn the tide of war.

Therese Harsanyi — Swept up in new romance and the spectacle of Paris, the Baron's daughter is blind to the dangers stalking her family and the city she loves.

Rudolph Harsanyi — Unsure whom to trust, the Baron's son's grief over his mother's death twists into growing anger and a desire to break free.

As France and Prussia plunge toward war, one family is caught in a web of deceit, political intrigue, and murder that threatens to tear them apart.

Email ThisBlogThis!Share to TwitterShare to FacebookShare to Pinterest
Labels: CFBA, Dark in the City of Light, Paul Robertson