Seeds of Summer by Deborah Vogts (Review and Giveaway)

**Leave a comment on this post before Sunday June 27 at midnight to be entered to win a copy of this book.**

A word from Deborah:

If you haven't guessed by now, the books I write are set in the country. I believe my most dedicated readers will be those who live in the country, those who have moved from the country and still hold it in their hearts, or those who have never lived there but long for the simple life it offers. Because of this, I've chosen Country at Heart as my writing brand, which is also the title of my Blog.

I began my first book when I was in high school. In college I studied English literature and journalism. Then came marriage, kids . . . life. During that time, I piddled with my writing but didn't take it seriously until 2002 when I joined a local writer's group and American Christian Fiction Writers. I also joined a critique group, took online writing workshops, read writing book how-to's and attended writer's conferences. Now I have an agent, Rachelle Gardner, at WordServe Literary and have been contracted with Zondervan for a three-book contemporary romance series.

The Seasons of the Tallgrass series captures the spirit and dreams of ordinary people living in the Flint Hills of Kansas--one of the last tallgrass prairie regions in the world.

The first book, Snow Melts in Spring, is available in stores now. Seeds of Summer released May 2010. 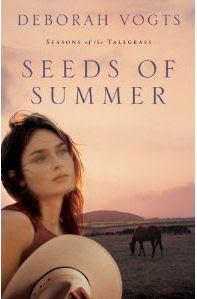 Upon the death of her father, Natalie returns to the Flint Hills to raise her two half-siblings and run the family ranch, giving up her dreams for the future. She soon realizes her time in college and as Miss Rodeo Kansas is not enough to break the bonds that held her as a girl.

Jared Logan, a new pastor in Diamond Falls, is set on making a good impression to his first congregation, but finds that change doesn't come easy for some people. In fact, most in his congregation are set against it. Natalie and her troubled family provide an outlet for his energy and soon become his personal mission project.

Having raised her stepbrother and sister from an early youth, Natalie's self-sufficient nature isn't inclined to accept help, especially from a city-boy do-gooder like Jared Logen. Though attracted to him, there's no way she'd ever consider being a pastor's wife. Bible studies and bake sales just aren't her thing.

Jared repeatedly comes to Natalie's rescue, forcing her to see him with new eyes. At the same time, Jared's plan to plant Christ's word in Natalie's heart backfires when he loses his own heart to this wayward family. When problems arise in his congregation, he must face his greatest fears---of letting down God, his congregation, or those he loves. His time with Natalie has shown him the importance of standing by those you love, a lesson he chose to ignore in order to please his father years ago.

This is put to the test when Natalie faces a battle of custody of her half-siblings against the mother who abandoned them twelve years ago. Natalie's fight for the children turns into a fight for custody of her heart as she learns the true meaning of unconditional love. In turn, Jared must decide which dreams are his own---and whether Natalie is part of those dreams.

If you would like to read the Prologue and first chapter of Seeds of Summer, go HERE.

This is the second book in the Seasons of the Tallgrass series. I did read the first and this book can stand on its own if necessary. Seeds of Summer had believable characters and an interesting plot line. The author does a good job with her descriptions and I enjoyed reading the book.I loved Jared and Natalie and how their romance developed too. The faith element is there but not overwhelming. Recommended. :)

I'd love a chance to win Seeds of Summer, please include me. Thanks!
worthy2bpraised[at]gmail[dot]com

Sounds amazing.
Well, I arrived late here =/
No problem, hope who win this book have a good time.