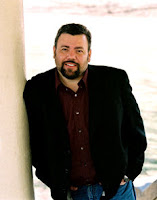 Robert is an award-winning author of over a thousand published articles and short stories. He is currently a contributing editor for New Man magazine. His work has appeared in Reader's Digest, Travel & Leisure, Modern Bride, Consumers Digest, Chief Executive, and The Arizona Daily Star, among other publications. In addition, he previously worked as a celebrity journalist, interviewing Stephen King, Tom Clancy, Charlton Heston, and others for magazines such as Rocky Road, Preview, and L.A. Weekly.Robert is an avid scuba diver, swimmer, reader, traveler, and a law enforcement and military enthusiast. He lives in Colorado with his wife and four children.Robert's first novel painted a scenario so frighteningly real that six Hollywood producers were bidding on movie rights before the novel was completed. His acclaimed debut novel, Comes A Horseman, is being made into a major motion picture by producer Mace Neufeld and his short story "Kill Zone" was featured in the anthology Thriller, edited by James Patterson.Bob has sold the film rights to his second book, GERM. And he is writing the screenplay for a yet-to-be-written political thriller, which sold to Phoenix Pictures, for Andrew Davis (The Fugitive, The Guardian) to direct!He is currently working on his fourth novel.

Deep in the isolated Northwest Territories, four friends are on the trip of a lifetime. Dropped by helicopter into the Canadian wilderness, Hutch, Terry, Phil, and David are looking to escape the events of a tumultuous year for two weeks of hunting, fishing, and camping.Armes with only a bow and arrow and the basics for survival, they've chosen a place far from civilization, a retreat from their turbulent lives. But they quickly discover that another group has targeted the remote region and the secluded hamlet of Fiddler Falls for a more menacing purpose: to field test the ultimate weapon.With more than a week before the helicopter rendezvous and no satellite phone, Hutch, a skilled bow-hunter and outdoor-survivalist must help his friend elude their seemingly inescapable foes, as well as decide whether to run for their lives...or risk everything to help the townspeople who are being held hostage and terrorized.An intense novel of character forged in the midst of struggle, survival, and sacrifice. Deadfall is highly-aclaimed author Robert Liparulo's latest rivetingly smart thriller.Get Downloads and EXCERPTS at http://www.liparulo.com/

"In Deadfall, Robert Liparulo gives us a fresh fast paced novel that instills a well founded fear of the villians and an admiration for the people who refuse to be victims. It truly deserves the name thriller.-Thomas Perry, best selling author of The Butcher's Boy and Silence

"Another brilliantly conceived premise from Robert Liparulo. Deadfall will leave you looking over your shoulder and begging for more."-DAve Dun, best selling author of The Black SilentA NOTE

from Bob: I’d like to give away five signed copies of Deadfall to readers of CFBA blogs during my tour. All they have to do is sign up for my e-mailing list (they won’t be inundated!) by going to my website (www.robertliparulo.com) and going to the “Mailing List” page. Or email me with “CFBA giveaway” in the subject line.And a second NOTE from Bob: I wanted to let you know that I’m holding a contest on my site:**one winner a week till the end of the year for a signed Deadfall**one winner a week till the end of the year for an unabridged audio MP3-CD of Deadfall***and on Dec. 31, I’m giving away an iPod Nano, pre-loaded with an unabridged audio recording of DeadfallWinners are selected from my e-mailing list—sign up at my site. If a winner has already purchased what he/she wins, I will reimburse them for the purchase price (or give them another—whichever they choose), so they don’t need to wait to see if they win before buying Deadfall.
Brittanie: I do not have a review yet ... college student with lots of homework lately. I will have my review up soon. :)
- November 08, 2007